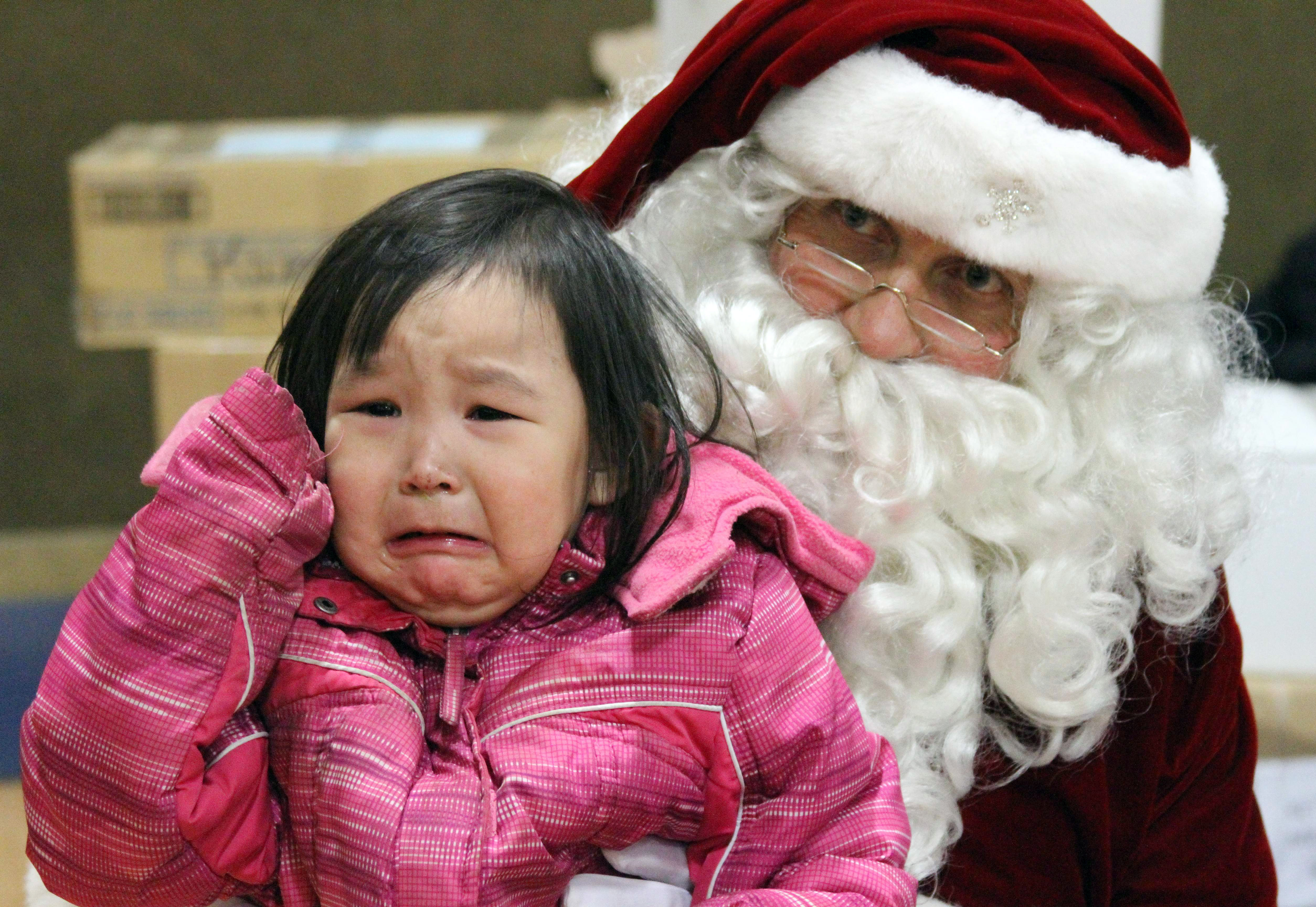 KWETHLUK, Alaska  - The mere presence of Santa and Mrs. Claus put broad smiles on the faces of many children in this Alaskan Yup'ik Eskimo community this week, and it wasn't just because they were about to receive gifts.

For some of the children, this was the first time they had laid eyes on the man with a white beard in the red suit, the mythical character they have heard so much about over the years.

For some of the toddlers, the experience with Santa reduced them to tears.

"They get scared, some of them, the first time seeing him (Santa)," said parent Roy Michael, adding the program is important not only for children but also families. A village-wide announcement of Santa's visit went out, and parents, community members and elders from the village of about 700 people filled the small gym on Wednesday afternoon.

The rare visit was thanks to the Alaska National Guard, which attempts to arrange several Operation Santa Claus visits to remote Alaska Native villages every year.

Volunteers can fly in helicopters or planes for hours in the nation's largest state just to reach some of these places.

"You don't see anything for ever and ever, and then all of a sudden, there's a little village out there," said the program's chairwoman, Jo Katkus. "It's hard to describe how remote some of these places are.

"Santa and Mrs. Claus is not something that normally happens out there for them," she said. "It's a real treat to be able to get in there and do something for the kids that they might not ever see."

The fact the visit even happened is a testament to the adaptability of Alaskans, whose flight plans change at any given moment because of weather or mechanical issues. Flying - oftentimes in bad weather - is required in Alaska since most of communities are off the state's limited road system.

The original plan was to fly the volunteers in the military transport to the western Alaska hub community of Bethel, and then take the National Guard's Blackhawk helicopter the last 12 miles to Kwethluk.

But a mechanical issue grounded the helicopter, making it appear the program's second scheduled visit to the Yup'ik community would be a bust. A mechanical failure doomed a planned visit last month.

Instead of giving up, 10-year program veteran Dina Banez dug out her cellphone. Within minutes, she found a local air taxi company, Grant Aviation, willing to donate a flight to take about a third of the volunteers and gifts to Kwethluk, despite wind gusts of up to 50 mph.

This wasn't even the most creative fix she and others have come up with since the program began in 1956. They try to visit three remote Alaska villages every year.

"We've gone on dog sled from different villages, snowmachines, ATVs, pickup trucks, whatever it is. We adapt and overcome, and it's all to make the kids' Christmas and bring a little joy to them," Banez said.

The visitors arriving in the school multipurpose room, where lunch was just finishing up, created a buzz throughout the school.

Everyone was excited "because we hardly get Operation Santa, and it's fun for the kids," said senior Alicia Michael, 17.

Teachers, some speaking in English, others in Yup'ik, paraded their students into the gym, where photos were taken with Santa and Mrs. Claus before they received a gift.

Since two-thirds of the volunteers remained in Bethel, plans had to be changed on the fly. After the older kids received their presents, the younger children came back to receive more swag after volunteers opened up additional boxes: Backpacks filled with school supplies, toys, toothbrushes and floss.

Long gone are the days when children received bags of candy, and the toothbrushes are intended to promote good dental care in rural Alaska, where there are few dentists.

Children were also given a book, which Banez said is the highlight for many children, and received an apple and an orange each on the way out of the gym - a treasure in western Alaska, where fresh fruit is an expensive luxury.