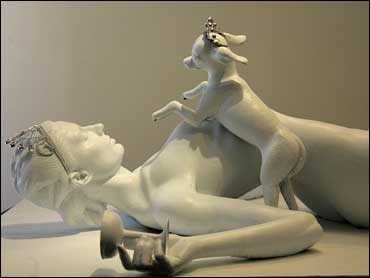 How did Paris Hilton end up in a former Brooklyn garage — naked, provocatively posed and seemingly very, very dead?

Of course, it's just a sculpture — one that graphically depicts an autopsy on the jail-bound socialite celeb for a show warning teens about underage drinking.

The sprawled-out "Hilton" clutches a cocktail glass in one hand, a cell phone in the other as her distressed dog, Tinkerbell, jumps across her bare chest. She and the animal wear matching tiaras.

It's one of several whacked-out works that have gotten attention for artist Daniel Edwards. Last August, Edwards flaunted a busty Sen. Hillary Rodham Clinton sculpture at Manhattan's Museum of Sex. His earlier works — of Ted Williams' severed head and a naked Britney Spears giving birth — stirred up other artistic storms.

In the Hilton exhibit, which opens Friday at a gallery run by Capla Kesting Fine Art in the Williamsburg neighborhood, removable "innards" are exhibited on a display stand placed in a sexually suggestive manner next to the "body."

Hilton's spokesman, Elliot Mintz, did not immediately return a call for comment from The Associated Press.

"Around this time of year, I think of a couple of friends I lost in high school because of drinking and driving," said the artist, dressed in snow white as he stood by the feet of his creation on Wednesday.

Edwards said he's using this celebrity "as a vehicle for a public-service announcement, to educate teens."

Edwards started making the work in polyester resin in January after the infamous party girl's arrest. On May 4, a judge ordered Hilton, 26, to report to a county jail by June 5 to serve a 45-day sentence for violating the terms of her probation in an alcohol-related reckless driving case. Her lawyers have taken steps to appeal the sentence.

The 42-year-old artist, a father of three from Moosup, Conn., acknowledges that Hilton's primary claim to fame is "as a seductress. But I do respect her ability to build this career out of pretty much nothing."

He says his provocative use of empty celebrity, plus the shock factor, "rings a bell, it brings it home. If one person is saved, that's awesome."

Gallery director David Kesting said the sculpture counters a disturbingly glamorized trend of Hollywood girls gone wild. The work, no doubt, is also aimed at making money. Buyers are asked to call Capla Kesting for a price, which was not disclosed.

High school students are encouraged to take a virtual tour of the installation at parishiltonautopsy.com — then compete for prizes by writing an "obituary" for the socialite.

If you go to the gallery, by the way, you're encouraged to touch.