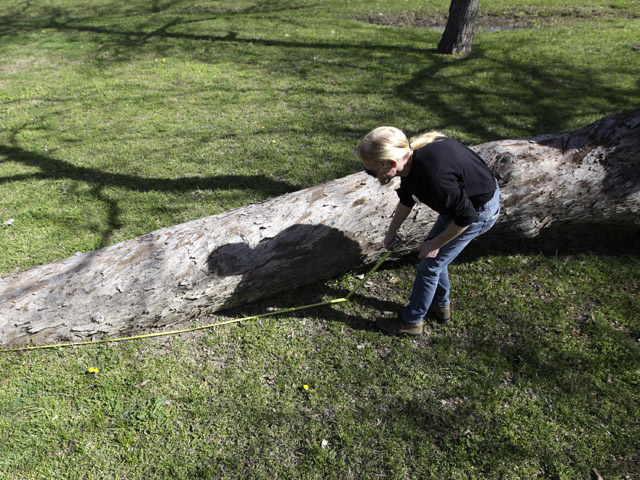 (AP) DALLAS - The pecan tree, more than 300 years old, stands out from the others in a forested area of Dallas, a 25-foot segment of its trunk slightly bowed and running almost parallel to the ground before jutting high up into the sky.

It, like numerous others across the country known as Indian marker trees or trail trees, was bent in its youth by American Indians to indicate such things as a trail or a low-water creek crossing.

"If they could talk, the stories they could tell," said Steve Houser, an arborist and founding member of the Dallas Historic Tree Coalition. The trees, he said, "were like an early road map."

The coalition says their mission of protecting and maintaining the trees is becoming more urgent year by year.

"We feel time pressure to let people see these wonderful trees before they are gone," said Mary Graves, the group's president.

The coalition has recognized four marker trees in Texas and is investigating reports of some 32 others across the state. The group also serves to celebrates the heritage the trees represent, Houser said.

The Jasper, Ga.-based nonprofit Mountain Stewards has been compiling a database of the trees since 2007, documenting about 1,850 Indian marker trees in 39 states.

Those who research the trees have a verification process, as they must be old enough — at least 150 to 200 years old. It also helps if scars can be found that would indicate it had been tied down. Sometimes, the researchers consult with tribes for confirmation.

"Mother Nature can bend a tree and it can look in some cases almost like an Indian tree," said Don Wells, the president of Mountain Stewards. He says people contact the group about three to five times a week to inquire about whether an oddly shaped tree is a marker tree, he said.

He drove several hundred thousands of miles over the years, pored over books that might give clues as to where to find the trees, talked to locals and researched the locations of old American Indian trails.

"Once people figure it out, they're amazed," said Downes, who also makes the trees frequent subjects of his sculptures.

In Colorado, most of the bent ponderosa pines at Florissant Fossil Beds National Monument point in the direction of Pikes Peak, the landmark about 8 miles away that was considered a sacred site by the Ute Indians, said park ranger Jeff Wolin.

"They are living archeology," said Rick Wilson, Florissant's chief ranger, who added that they speculate the Utes bent the trees to mark a trail to Pikes Peak.

"It's something that you want to hug and say, `Hey, there was a time in your life when you were special to us and now you are still special and look how beautiful you are,' " Coffey said.

He said many of the marker trees in Texas probably helped Comanche warriors as they battled the U.S. military.

"There were times when our warriors would seek refuge and these marker trees directed them to certain locations where there's an abundance of water, shelter, animals," Coffey said.

Earl Otchingwanigan, a member of the Ojibwe tribe, said he'd heard about the trees while growing up on a reservation on Lake Superior. Last year, he discovered one in a park near his Crystal Falls, Mich., home after his wife spotted a tree that resembled the letter `N' on a walk.

"A lot of people don't recognize what they are and they're a really important part of the history of this country," said Otchingwanigan, a professor emeritus at Bemidji State University in Minnesota.

"When I hear people are interested in it, I think they are starting to understand that there are a lot of messages on this earth that people cannot take for granted anymore," he said.