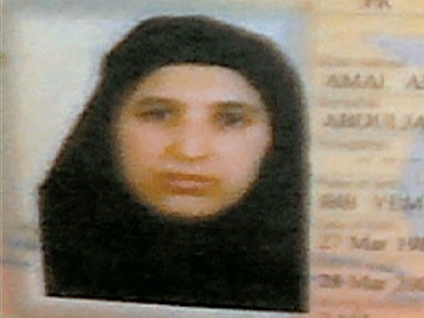 SANAA, Yemen - A Yemeni rights activist says his organization is trying to repatriate the young Yemeni widow of Osama bin Laden following the U.S. raid that killed the al Qaeda chief in Pakistan.

Abdel Rahman Barman says the widow, Amal Ahmed Abdel-Fatah al-Sada, should be brought back to her native country. She and her daughter, as well as two other bin-Laden wives and several children, are now held by Pakistani authorities.

The 29-year-old al-Sada was shot in the leg during the May 2 raid by U.S. Navy SEALs on bin Laden's compound in Pakistan.

Her father, Ahmed Abdel-Fatah al-Sada, says his daughter wasn't involved in bin Laden's activities, and that "her return is a basic demand."

Barman says his National Organization for Defending Rights and Freedoms hopes for support from the Yemeni government.

Meanwhile, London-based Al-Quds al-Arabi reported Tuesday that Zakaria al-Sada Abdel Fattah, the brother of bin Laden's widow, received a phone call from the Yemeni Ambassador in Islamabad in which he informed him that he's met with a Pakistani official who reassured him about the health of his sister and her five children and promised to allow for the Yemeni diplomat to meet them in the next few days. Ambassador Abdo Ali Abdel Rahman told Zakaria that the Yemeni Foreign Ministry needed to submit an official request to the Pakistani government in order to allow for Amal and bin Laden's children to be repatriated to Yemen, and that the Yemeni government is accelerating efforts to reunite achieve that goal.
View CBS News In
CBS News App Open
Chrome Safari Continue