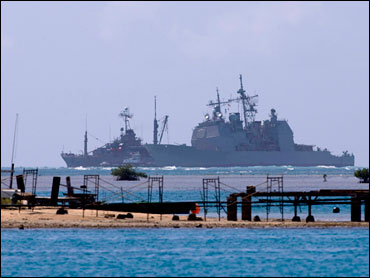 The commanding officer of a $1 billion warship that ran aground along the coast of Honolulu has been relieved of duty, the Navy said Monday.

The move came hours after Navy freed the guided missile cruiser, which had been stuck for more than three days.

Carroll had taken command of the USS Port Royal in October. Its temporary commanding officer will be Capt. John T. Lauer III, who is currently assigned to the staff of Naval Surface Group Middle Pacific.

The ship - one of the Navy's most advanced - ran aground when it was offloading sailors, contractors and shipyard personnel late Thursday. Efforts to re-float the vessel over the weekend were unsuccessful.

The Port Royal was extracted from a rock and sand shoal about 2 a.m. Monday after about 500 tons of seawater and 100 tons of anchors and other equipment were moved off the boat, the Navy said. The wreck site would be examined to determine if there was a fuel leak or spill.

The cruiser was structurally sound, but an eight-inch thick rubber sonar dome was cracked. Blade tips on the vessel's two propellers were sheared off.

The ship was being towed to Naval Station Pearl Harbor for inspection. The Navy has not discussed what may have caused the grounding.

The vessel had just finished its first day of sea trials after wrapping up a four-month routine maintenance stay at Pearl Harbor Naval Shipyard. The 15-year-old Port Royal usually has about 24 officers and 340 enlisted sailors on board.

The Port Royal is capable of firing interceptors into space to shoot down missiles. It's also equipped with Aegis ballistic missile tracking technology.

Earlier reports said Smith, the Naval Surface Group Middle Pacific commander, was on board the ship at the time of the grounding. He wasn't, and had boarded the vessel on Friday to be the on-scene commander of the recovery mission.