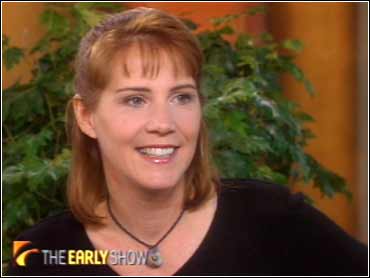 Gretchen Cordy, a preschool teacher from Clarksville, Tenn., was the first person voted off the island under the new rules, and she visited The CBS News Early Show Thursday to talk about her stint on the adventure game show.

In the end, it was the voting alliance among Richard, Rudy, Kelly, and Susan that sent her off the island and out of the game.

"I think that they had a goal in mind, which was to win the million dollars," Cordy said. "I had that goal, too, when I first got there. Not that I wouldn't have gladly taken the check. But I think, when I saw what it would take personally...the deceit and the whole business, I am not capable of that. Even for $1 million, I couldn't do that.

"I'm not saying that I think they're wrong or that they're immoral," she added. "I just couldn't do that."

When the time came for her to go, Cordy recalled, it was sad and sudden.

"It's kind of like leaving summer camp," she explained. "You get to meet everybody. You don't get to say goodbye. Off you go, and there's no closure to it. You walk down the plank, and that's it."

But she also missed her husband and her children, a 14-year-old son and 9-year-old daughter.

Cordy had thought she was a natural for the program because she worked for six years as an Air Force survival instructor.

"Well, 'survivor' doesn't necessarily mean survival skills, island skills," Cordy explained. "There's a whole new set of survivor skills. To survive on that island, it's not just making fires and catching rats. It's about...keeping yourself there."

"I ould do it again in a minute," said Cordy, adding wryly, "I would lose again, I'm sure."

In The Early Show's weekly Survivor round-table discussion, New York radio host Leslie Gold assessed Gretchen: "She was formidable. She was a little bit threatening. She was rock solid. But she wouldn't play politics."

Among her listeners on CBS-owned WNEW-FM, said Gold, Susan is a big favorite, "because she's tough, and she's dirty, but not too dirty. Richard is seen as completely dirty. Plus, the fact that he walks around naked is a complete irritation."

And, she added, many fans can't figure out why Gervase has lasted this long. "He thinks he's Dean Martin at a cocktail party," said Gold.

All in all, Survivor is a big soap opera, according to Elaine Flores, executive feature writer at Soap Opera Digest: "You've got intrigue. You've got drama. You've even got romance."

Phil Porter, author of Eat or Be Eaten, said that, while Richard may be trying to play the corporate game, he's not quite up to it, even though he is a professional corporate trainer.