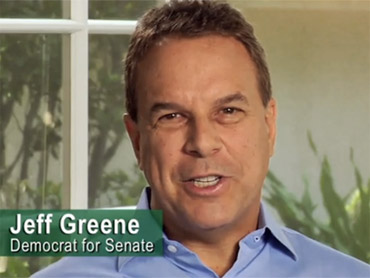 Boxer Mike Tyson was the best man at his wedding. Hollywood madam Heidi Fleiss lived in his guest house. And the television ads for Jeff Greene's out-of-nowhere bid for Florida's Senate seat are financed by a fortune made from betting on the fall of the housing market.

Too much baggage for a candidate?

Not for Greene in an antiestablishment year that has been a boon to political outsiders.

A recent poll finds the Palm Beach billionaire has spent his way into a near tie with Rep. Kendrick Meek, who has been in the race for the Democratic nomination for months. While Meek hasn't bought TV ads so he can conserve his cash, Greene's heavily circulated commercials describe him as "an outsider willing to take on the career politicians."

Greene, 55, says he'll spend whatever it takes to win. He's already spent $4 million. Meek's campaign had almost $4 million in the bank March 31, according to his last federal report, but hasn't done much TV advertising.

A telemarketing and real estate entrepreneur who has been a millionaire for decades, Greene shot into billionaire status in the housing market collapse. Forbes estimated his fortune at $1.25 billion last year and listed him at No. 317 on its list of richest Americans. He was among the few who foresaw that the housing bubble would burst and jumped on the winning end of complex financial derivatives that collapsed some Wall Street investment banks.

Great for his business, but not a story that would endear him to some voters. Yet Greene is among several superrich business leaders in contention for seats against political mainstays. Former eBay CEO and President Meg Whitman and former Hewlett Packard CEO Carly Fiorina have captured the GOP nomination for governor and Senate in California. Rick Scott, who made millions running a hospital chain, suddenly is making a strong run in Florida's gubernatorial race.

Greene's promise to use his business success to "shake up Washington" has been heard in various forms from other wealthy players in politics, with mixed results.

Billionaire Michael Bloomberg is serving his third term as mayor of New York, and Fiorina and Whitman are strong candidates. But there are plenty of failures, such as magazine titan Steve Forbes, who ran unsuccessfully for the Republican presidential nomination in 1996 and 2000, and Mitt Romney, who also failed to capture the Republican nomination in 2008.

Attention on Florida's heated Senate race has focused largely on Gov. Charlie Crist, who is running as an independent after abandoning the Republican Party, and conservative Republican Marco Rubio, the tea party favorite who forced Crist out of the GOP.

Two months ago, political analysts expected that Crist's shift to independent would split the GOP vote and give Meek, who appeared a shoo-in for the Democratic nomination, an outside chance of winning the seat. Now Crist is courting groups that historically supported Democrats, and Greene's television blitz has put him in serious contention to upset Meek in the Aug. 24 primary.

The best way to get name recognition quickly in a state as large as Florida is on TV, Greene's strength. If he keeps his commercials on the air, his name recognition could outstrip Meek's in a few weeks, said Aubrey Jewett, a political science professor at the University of Central Florida.

"Up until now we haven't had a primary," said Meek's spokesman Adam Sharon. He said TV ads cost about $1.5 million a week in Florida, money is finite and Meek "will go on television at the right time."

The TV ads have given Greene the ability to define himself.

And they are not about the colorful characters in his past.

After serving prison time for running a high-priced Los Angeles prostitution ring, Fleiss became a victim of domestic violence. Greene says she came to him looking for help. Greene says he befriended Tyson after the former heavyweight boxing champion had served time for rape. He said he believes in redemption.

"I don't live my life looking over my shoulder, worried about who my friends are in case I ever run for office," he says.

Greene's loose party affiliation could be an issue for voters. He ran as a Republican in a 1982 California congressional race, losing in the primaries. Since then he's mostly registered as an independent.

Greene has not released his tax returns, a voluntary step most candidates follow. He's also asked for an extension in filing the personal financial disclosure form.