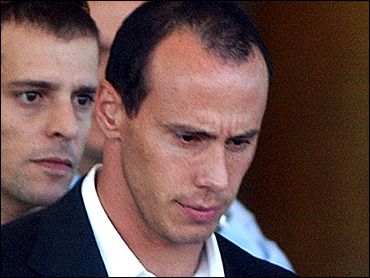 Greek sprinters Kostas Kenteris and Katerina Thanou withdrew Wednesday from the Athens Games, nearly a week after they missed a drug test and were later hospitalized following a suspicious motorcycle crash.

"I'm withdrawing from the Olympics," Kenteris said after meeting with the International Olympic Committee's disciplinary commission.

He also said he cut ties with his coach, Christos Tsekos, who had been suspended by the Greek Olympic Committee, along with the two runners.

Kenteris' announcement had no bearing on the hearing. The IOC's executive board met to discuss whether the two were guilty of doping violations and should be expelled from the games. Its decision, now moot because the runners pulled out, was expected later Wednesday.

Kenteris, the reigning 200-meter Olympic champion, is the country's most celebrated athlete and was Greece's best hope for gold in track at the Athens Games. He was considered a leading candidate to light the Olympic cauldron during the opening ceremony, but a Greek windsurfing champion got the honor instead.

The scandal overshadowed the games' opening ceremony and shamed a nation in one of its most eagerly awaited moments.

"I declared all the facts of my case which state that I am innocent," Kenteris said. "I was never informed that I had to attend a doping test at the Olympic Village."

Thanou was the 100-meter silver medalist in Sydney four years ago.

"The people who are accusing me are the ones who stood by me for photos after my victories; others don't even know me," she said.

"It's a very hard thing for an athlete to withdraw from the Olympic Games, especially when they're in their homeland."

Both sprinters spent about an hour behind closed doors and emerged to a mob of reporters and television cameras. Neither runner showed signs of injury from the reported motorcycle crash.

The IOC commission has been looking into why the two athletes missed a drug test in the Olympic village last Thursday. A few hours later, they were taken to a hospital with cuts and bruises after they said their motorcycle skidded on a road. The police are investigating.

The commission twice postponed hearings while the sprinters were in the hospital, giving them a chance to defend themselves in person.

The IOC probe is only part of the sprinters' problems.

Arne Ljungqvist, the anti-doping chief of the International Association of Athletics Federations, said the group would discuss the case at a meeting in Athens on Aug. 26. A decision on possible sanctions will not be made until well after the Olympics, he said.

Under IAAF rules, athletes can be suspended for two years if they miss three drug tests in 18 months. The Greek runners are being investigated by the IOC for two no-shows since July 23, and the IAAF is looking into a third possible case involving Kenteris in Tel Aviv last month, Ljungqvist said. Tsekos could also face IAAF sanctions, he added.

The Greek Olympic Committee suspended the athletes and Tsekos on Saturday, pending a final decision by the IOC.

Afterward, the coach blamed the media for the athletes' decision.

In other Olympic events:

American Kristin Heaston made history even before the shot put left her hand Wednesday, becoming the first woman to compete at the Ancient Olympia site that gave birth to the Olympics 2,780 years ago.

With thousands of spectators watching from a grassy knoll, some waving flags and others napping on blankets in the morning sun, Heaston was the first competitor in the qualifying round. Women were not allowed to perform in the ancient Olympics.

The shot put is being held at this former religious sanctuary, about 200 miles southwest of Athens, two days before the rest of the athletics competition begins Friday at the Olympic stadium back in the nation's capital.

Heaston, who failed to advance to the final later Wednesday, said she might have been focused too much on the unique setting and not on her performance.

"It was awesome, I just wish I had done better," said Heaston, a strength coach at Stanford University. "As you can see, I probably needed to think about what I was doing more in the ring than to think about the history.

"It's a bit overwhelming. I was just trying to think of it as a backyard track meet."

The women's preliminaries were the first competition at the site since 393 AD, when the ancient Olympics were abolished by the Roman emperor Theodosius as a pagan practice. The first Olympics were held here in 776 BC.

Five-time medalist Michael Phelps of the U.S. is in another semifinal, qualifying in the 200-meter individual medley. Florida's Ryan Lochte also advanced to the semifinal. Double medalist Natalie Coughlin has qualified in the 100 freestyle. Kara Lynn Joyce of Michigan was second fastest in 100 qualifying.

Californian Aaron Peirsol led qualifying in the 200 backstroke. He's the world record-holder in the event. Indiana's Bryce Hunt also advanced to the semifinal.

World record holder Amanda Beard qualified third in the 200 breaststroke. Carolina Bruce of Kansas is also in those semis.

The Dominican Republic upset the United States in women's volleyball, a major blow to any medal homes the American team may have had. The Dominicans won in five sets, 26-24, 22-25, 27-25, 23-25, 19-17. That drops the U.S. to 1-2 in pool play with upcoming games against sixth-ranked Russia on Friday and fifth-ranked Cuba on Sunday.

The U.S. women's water polo team blew a big lead and lost to Canada. The Americans led 5-1 early in the fourth quarter only to see the Canadians score the last five goals to pull out a 6-5 decision. Both teams have a record of 1-1.

Michael J. Fox was in "7 years of denial" after Parkinson's diagnosis