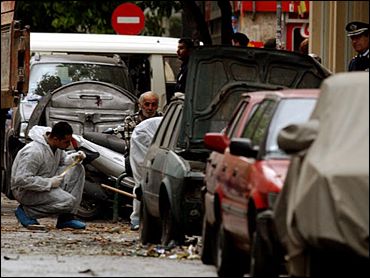 A Greek government minister said Friday that three bombings in Athens this week were minor incidents and he provided fresh assurances that security measures will be ready to protect the Summer Olympics from terrorism.

"Our plans are very well prepared," George Voulgarakis, minister of public order, said at a news conference. "We have taken into account all the scenarios that the mind can think of."

Voulgarakis was in Washington for meetings this week with U.S. security and intelligence officials. He said he was not given any evidence that al Qaeda or other international terrorist group has an active presence in Greece.

"We do not have terrorist cells in Greece," he said.

The three bomb blasts outside a police station in suburban Athens on Wednesday are believed the work of "local extremists" not connected to the Olympics preparations, Voulgarakis said. Had they exploded months or years ago, he added, they would have attracted little notice outside Greece.

"In Europe, there is a different sense of such kinds of incidents," he said. "If it were not for the Olympic Games, it would not be in the newspapers."

Greece is spending about $1.2 billion to safeguard the Games, set for Aug. 13-19. The International Olympic Committee has taken a $170 million insurance policy against war, terrorism or an earthquake during the event.

At the news conference, Voulgarakis said some 70,000 security personnel will be on duty for the Olympics. He said there have been 30 "test events" for security and eight large readiness exercises, with more than 2,800 police officers trained on a high-tech security system.

NATO will provide air and sea patrols and provide intelligence information. Greece has signed 37 protocols with 22 countries to exchange intelligence and other security information, Voulgarakis said. One outstanding problem, he said, is ensuring that all this intelligence is coordinated so it can be properly analyzed and acted upon.

All security preparations should be ready by July 1, he said.

"We have done a lot of things in a short time," said Voulgarakis, who took office in March after his party won national elections. "The point is, we will be ready."