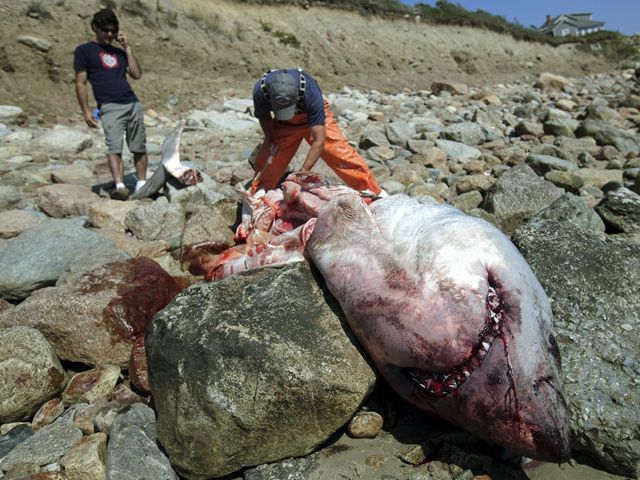 The shark was found washed across shore between Wesport and Little Compton, R.I., CBS affiliate WBZ Boston reported Saturday. A man who was fishing in Brayton Point in Wesport noticed the fish and contacted police.

Officials said the great white weighed 1,700 pounds. The discovery of the shark led to the closure of Little Compton's South Shore Goosewing Beach.

"We're thinking it's a basking shark at first because they do wash ashore quite a bit," said Greg Skomal, Massachusetts' shark expert.

"But this is clearly a white shark and it catches us a little off guard because we don't typically see them up on the beach."

There has been recent shark activity this summer Massachusetts. This past Thursday, two sharks were seen in Cape Cod, which led officials to ban swimming the area's popular beaches, "CBS This Morning" reported. And in July, a man was bitten by a Great White while bodyboarding off Truro; he survived.

One expert, Simon Thorrold, told "CBS This Morning" that the shark activity is probably due to the growing presence of seals, which make up an essential part of a shark's diet. "I think we're probably seeing more white sharks in the area at the moment," he said. "And the white sharks have probably been drawn into the area by a really large increase in the number of grey seals that are in the area."

As WBZ reported, it is uncertain how the shark that was found in Westport had died. Experts plan to dissect the fish for research.