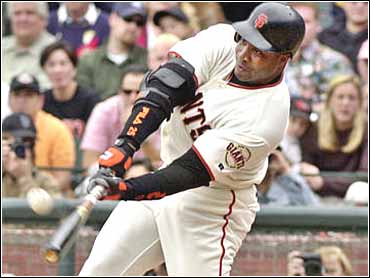 Bonds had one of the greatest seasons in baseball history, hitting 73 homers to break the previous record of 70, set by Mark McGwire in 1998. The 37-year-old outfielder also had an .863 slugging percentage and 177 walks, breaking season marks set by Babe Ruth.

"No amount of money would make me leave San Francisco, to be honest with you. I always wanted to stay a San Francisco Giant," Bonds said. "Unless there was a blockbuster, out-of-the world offer, I wasn't going to leave."

Bonds, the first player to win four Most Valuable Player awards, became a free agent after the season but the Giants were the only team to acknowledge a bid. He accepted the team's offer of salary arbitration on Dec. 20, and the sides were set to exchange proposed salaries Friday for a one-year contract.

"Peter Magowan made my childhood dream come true," Bonds said, referring to the Giants owner. "I was glad I was able to help myself and the organization to stay at home. I'm so excited right now I want to call my godfather (Willie Mays) up and tell him I get to play in his back yard the rest of my career."

He isn't concerned about getting too old to fulfill the deal.

"His personal accomplishments speak for themselves," Giants general manager Brian Sabean said. "He is such a vital element to our club's success."

Teams were wary of a long-term deal because of his age and lack of success in the postseason, where he has a .196 average (19-for-97) with one homer and six RBIs.

Bonds has 567 career homers, seventh on the career list and 188 short of Hank Aaron's record.

By Rick Eymer © MMII The Associated Press. All Rights Reserved. This material may not be published, broadcast, rewritten, or redistributed