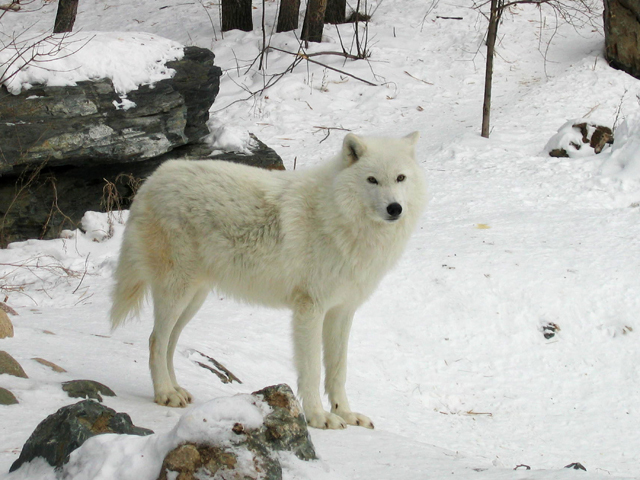 ATLANTA, Mich. - After devoting four decades and tens of millions of dollars to saving the gray wolf, the federal government wants to get out of the wolf-protection business, leaving it to individual states - and the wolves themselves - to determine the future of the legendary predator.

The Obama administration Wednesday declared more than 4,000 wolves in Michigan, Minnesota and Wisconsin have recovered from widespread extermination and will be removed from the endangered species list.

Coupled with an earlier move that lifted protections in five western states, the decision puts the gray wolf at a historical crossroads - one that could test both its reputation for resilience and the tolerance of ranchers and hunters who bemoan its attacks on livestock and big game.

Wednesday's announcement could open the door to hunting for wolves in the Great Lakes. However, no seasons have been set and federal officials say they will continue monitoring the population for five years. Similar actions are planned for most remaining Western states and the Great Plains.

The legal shield that made it a federal crime to gun down the wolves is being lifted in many areas even though wolves have returned only to isolated pockets of the territory they once occupied, and increasing numbers are dying at the hands of hunters, wildlife agents and ranchers protecting livestock.

Since being added to the federal endangered species list in 1974, the American wolf population has grown fivefold - to about 6,200 animals wandering parts of 10 states outside Alaska.

Wolves "are in the best position they've been in for the past 100 years," said David Mech, a senior scientist with the U.S. Geological Survey in St. Paul, Minn., and a leading wolf expert. The animals' long-term survival will "depend on how much wild land remains available, because wolves are not compatible with areas that are agricultural and have a lot of humans. There's just too much conflict."

Also Wednesday, the Obama administration put off a decision on protections in 29 Eastern states that presently have no wolves. The Interior Department said it still was reconsidering its prior claim that wolves in those states historically were a separate species, which effectively would cancel out protections now in place.

Since 1991, the federal government has spent $92.6 million on gray wolf recovery programs, and state agencies have chipped in $13.9 million, according to documents reviewed by The Associated Press.

"We are ready to declare success in those areas where wolves are now secure, turn over management responsibility to the states and begin to focus our limited resources on other species that are in trouble," said Gary Frazer, assistant director for the U.S. Fish and Wildlife Service's endangered species program.

The government still plans to nurture a fledgling Mexican gray wolf population in the desert Southwest. It's also weighing whether to expand protections for small numbers of the animals that have slipped into the Pacific Northwest from Canada.

However, there are no plans to promote their return elsewhere. Federal officials say it's not the government's job to return wolves to their previous range as long as the population is stable.

In Montana and Idaho, where wolves can now be legally hunted and trapped, officials are seeking to sharply drive down wolf numbers this winter to curb attacks on farm animals and elk herds.

Some scientists and advocates say the hunts offer a preview of what will happen when the federal safeguards are lifted elsewhere. The government, they say, is giving up the recovery effort too soon, before packs can take hold in new areas. Vast, wild territories in the southern Rockies and Northeast are ripe for wolves but unoccupied.

"The habitat is there. The prey is there. Why not give them the chance?" said Chris Amato, New York's assistant commissioner for natural resources.

But federal officials are grappling with tight budgets and political pressure to expand hunting and prevent wolves from invading new turf. They insist the animals best known for their eerie howl, graceful lope and ruthless efficiency in slaughtering prey will get by on their own with help from state agencies.

North America was once home to as many as a couple of million gray wolves, which are prolific breeders. But by the 1930s, fur traders, bounty hunters and government agents had poisoned, trapped and shot almost all wolves outside Canada and Alaska.

The surviving 1,200 were clustered in northern Minnesota in the 1970s. After the species was added to the endangered list, their numbers rocketed to nearly 3,000 in the state - and they gradually spread elsewhere.

Today, Wisconsin has about 782 wolves, Michigan 687 - far above what biologists said were sustainable populations. The success story is hardly surprising in woodlands teeming with deer, said John Vucetich, a biologist at Michigan Tech University. But even in such an ideal setting, the wolves were able to return only when killing them became illegal.

"What do wolves need to survive?" Vucetich said. "They need forest cover, and they need prey. And they need not to be shot."

Shooting already is happening - legally or not - as adventurous wolves range into new regions such as Michigan's Lower Peninsula and the plains of eastern Montana.

Those sightings are unsettling to farmers because packs have killed thousands of livestock nationwide during their comeback. If marauding wolves begin taking out livestock, people may quietly take matters into their own hands - "shoot, shovel and shut up," said Jim Baker, who raises 60 beef cattle near the village of Atlanta, Mich.

Wolves "could wipe me out in a couple of nights if they wanted," Baker said.

Since the late 1980s, more than 5,000 wolves have been killed legally, according to an AP review of state and federal records. Hundreds more have been killed illegally over the past two decades in the Northern Rockies alone. Ranchers in some areas are allowed under federal law to shoot wolves to defend their livestock. In the northern Rockies, government wildlife agents have routinely shot wolves from aircraft in response to such attacks. Often that involves trapping a single wolf, fitting it with a radio collar and tracking it back to its den so the entire pack can be killed.

Biologists are confident that neither legal hunts nor poaching are likely to push wolves back to the brink of extinction.

Idaho has been the most aggressive in reducing wolf numbers, offering a 10-month hunting season that sets no limits. State officials say they intend to reduce the population from 750 to as few as 150 - the minimum the federal government says is needed in each Northern Rockies state to keep the animal off the endangered list.

Studies indicate plentiful habitat remains in other regions, including upstate New York, northern New England and the southern Rockies of Colorado and Utah. But experts say the Fish and Wildlife Service's plan would mean that any wolves wandering into those states could be shot on sight unless protected by state laws.

"Wolves, next to people, are one of the most adaptable animals in the world," said Ed Bangs, a former Fish and Wildlife Service biologist who led the effort to return wolves to the northern Rockies. "The key with wolves is, it's all about human tolerance."

Officials in Michigan, Minnesota and Wisconsin say they're ready to manage their wolf populations in their states following the Obama administration's decision to drop gray wolves in the Great Lakes region from the federal endangered species list.

The U.S. Interior Department announced Wednesday the wolves have recovered from near-extinction and will lose their federal protection as of Jan. 27. Gray wolf population numbers more than 4,000.

Michigan Department of Natural Resources Director Rodney Stokes says the change will give state officials more flexibility to deal with problem wolves and make people more supportive of having the predators in their midst.

Wisconsin says after the federal order takes effect, it will issue permits allowing landowners to control wolves on their property where there are documented cases of depredation or harassment.