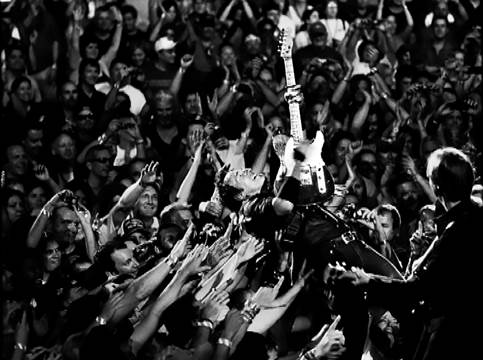 The following is a script from "Danny Clinch" which aired on Feb. 14, 2016. Anderson Cooper is the correspondent. David Browning and Michelle St. John, producers.

In March of 1999, an up-and-coming photographer named Danny Clinch got two phone calls that would change his life. The first came from Bob Dylan's manager, asking him to take some pictures of the legendary singer. And a few hours later, Bruce Springsteen's people also called to book him for a shoot.

In the 17 years since, Danny Clinch has photographed just about every heavyweight in the music world: rappers, rockers, country stars, jazz and pop artists. Tomorrow night, he'll be backstage at the Grammys, taking portraits of the winners as he has for 13 years now. Clinch has developed friendships with many of his subjects, and that gets him up close and personal access onstage and off. For example:

Bruce Springsteen -- hitting the road on tour once more, his wife Patti by his side. And Danny Clinch is there to talk a bit about old times and shoot the band rehearsing.

Danny Clinch: In '99, was the first time I photographed you guys and it was then.

Over the years, Clinch has taken thousands of pictures of Springsteen. And many have become classics.

Danny Clinch: This is in a farmhouse that's on Bruce's property. And it's just a really sweet little spot.

There are portraits of the artist offstage that mirror the tone and the message of his music. And there's the famous shot of Springsteen falling back into the crowd, where from the stage, Clinch had a perfect view.

Danny Clinch: I was like, right in there. And he fell back and I got my shot.

Anderson Cooper: And did you know you got it?

Clinch wears many hats, pun intended. As the official portrait photographer at the Grammys, he covers the musical spectrum. Tony Bennett and Lady Gaga.

Danny Clinch: I'm not like a strong-arm guy. I want to collaborate.

Danny Clinch: You want to find a common ground as quickly as you can.

Danny Clinch: You're in a sense part of the history of that moment. And I never really get tired of that, and I never take it for granted.

[Trey Anastasio: You want to go up onstage?

He goes way back with many musicians. That's Trey Anastasio of the band Phish, one of several that let him shoot on stage, trusting him to stay out of the way.

It's New Year's Eve: Phish is playing Madison Square Garden and to the crowd, Clinch is the invisible man.

Anderson Cooper: What is it about shooting a concert? What are you trying to get?

Danny Clinch: I'm trying to capture a moment. It's not about the singer at the microphone. I'm trying to look for, like, a moment in between.

He works from the back of the stage, hiding behind the drums or the amplifiers, waiting for that in-between moment. Popping up like a whack-a-mole to get his shot.

And sometimes over the years, it's paid off big, as in this classic photograph. The view from the stage of Foo Fighter's Dave Grohl and a cast of thousands.

Or this one, at a Pearl Jam concert. Eddie Vedder and Jeff Ament, airborne.

Danny Clinch: I popped up from behind Jeff's amplifiers. The whole stadium was lit. They're up in the air in that perfect moment.

Anderson Cooper: You were hiding behind an amplifier.

Anderson Cooper: Do you wear earplugs?

Danny Clinch: I should.

Anderson Cooper: But you don't.

Anderson Cooper: Wow. I'm surprised you can even hear me.

Anderson Cooper: Or are you just reading my lips?

Danny Clinch: Yeah. It is - I get out there and I'm like, "Jeez, I should probably have some earplugs." And then I'm like, I forgot them.

Learning the ropes, Clinch was an assistant to photographer Annie Leibovitz. He prefers shooting in natural light, and agrees with what the famous war photographer Robert Capa said: if your pictures aren't good enough, you're not close enough. And even when he's not working, he's still looking for that perfect shot.

Danny Clinch: I'm photographing all the time. I'm such a visual person and I don't want to miss that moment.

Anderson Cooper: You're never without your camera?

Danny Clinch: Yeah. See? I always want to be prepared, 'cause you never know who's going to come to your studio.

His studio is a place where any music fan would love to be locked up for a few days.

Anderson Cooper: It's like a history of rock and roll.

Danny Clinch: There's a couple things here I want to show you so we'll show them over here.

A couple years back, he photographed one of the men who started it all: Chuck Berry, who's now 89. And another founding father: Jerry Lee Lewis, who's 80. And here are some pictures from that first session with Bob Dylan.

Danny Clinch: We were trying to figure out, you know, give him a little something to do. Somebody came back with a whole bunch of different language newspapers. And he picked that one up and I started to shoot just, you know, keeping it real simple.

Danny Clinch: He was really professional and he was into it. We chose a shirt that he was gonna change into. He took his shirt off and I saw all the tattoos. And I said, "Would you mind doing one like that? And he said "Yeah."

Anderson Cooper: When you took this did you know how strong it was?

Clinch has branched out into making commercials and music videos. This one shot in Willie Nelson's bedroom on his tour bus.

Danny Clinch: Willie doesn't mind me taking his photograph, but he's not really crazy about sitting and being directed and all that sort of stuff. So I've found ways to work with that.

He also got some very candid stills. Nelson braiding his hair. And indulging in his favorite recreational pastime, smoking a huge stick of weed.

Anderson Cooper: I don't even know what it would be called, it's so big.

Danny Clinch: I know, it's something -

Danny Clinch: Somehow I can't remember what happened after that.

And then, there are the occasional shoots he wishes he could forget.

Danny Clinch: I was at a Madonna show many, many years ago and I was in the sweet spot and she came out and I mean it was the best part of the show. And I was shooting, shooting, shooting, shooting. And I'm like, "God, I must have shot a hundred pictures have I not run out of film?" And I opened the back of my camera and there was no film in there. So that happened to me only once.

No doubt one reason he gets along so well with musicians: he knows the language, wearing yet another hat to play with the Tangiers Blues Band, and sometimes jamming with the likes of Willie and Bruce. His harmonica, like his camera, goes everywhere he goes.

He grew up on the Jersey Shore, living in Toms River, a few miles down the Garden State Parkway from Springsteen country.

He got the photography bug from his mother.

And from his father he got a taste for classic rock and roll from the 50s and classic cars.

His prize possession: a 1948 Pontiac silver streak. The sort of car his father always noticed when Clinch was a kid.

And he's always found a way to work them into the shot. Springsteen with the Pontiac and in his wife's 1950 Hudson with Clinch's father at the wheel. An old Cadillac with Neil Young's hat. And Young inside, tooling around Nashville.

Danny Clinch: This was a great moment for me, I'm a big fan of Neil's, to be driving around in this Cadillac was -

Anderson Cooper: Yeah. Was he driving?

Danny Clinch: He was driving yeah, yeah. And we stopped at a little intersection and I grabbed it.

But nothing could prepare him for the trip he made in December to the old car capital of the universe: Havana.

Anderson Cooper: Cuba, Havana, it's gotta be a photographer's dream.

Danny Clinch: I'll tell ya. There's so much interesting culture and there's so much great color, everywhere you look is a photograph.

Anderson Cooper: You seem to have a smile on your face kind of all the time.

The Preservation Hall Jazz Band was invited to a Cuban music festival, and Clinch tagged along with a documentary film crew.

They play the traditional music of New Orleans. A distinctive sound -- and some distinctive instruments.

The rhythms of New Orleans and Havana are much alike. And the Americans were soon jamming with Cuban musicians: on stage, at their homes.

Between concerts, Clinch wandered the city, snapping away. And checking out the cars.

Danny Clinch: I'm not just a fan of the really restored ones, the shiny ones. But I like the working man's cars -

Danny Clinch: How they've fixed it, how it had been repaired time after time.

But his biggest thrill came backstage, with the band warming up.

Danny Clinch: They were preparing for the show. And it just turned into this impromptu, like jam, this percussion type thing. And I live for those moments.

He's seen a lot of moments, heard a lot of music. And has come -- to one conclusion.

Anderson Cooper: And you can get a photo out of it. You can capture it.

Writing in Clinch's notebook, Tupac Shakur said: if a picture is worth a thousand words, photographers are worth a million. That's a thought shared by Clinch's fellow native of the Jersey Shore, who says...

Bruce Springsteen: This is the man here.

Bruce Springsteen: If you want the picture...

Danny Clinch: Come and get it.

Bruce Springsteen: There he is.