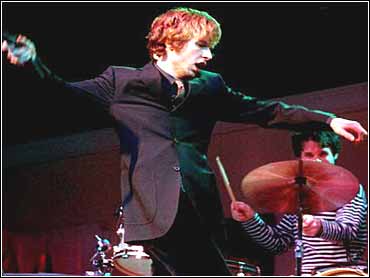 It's time for the Grammy Awards (CBS, Wednesday, Feb. 21, 8 p.m. ET/PT), and this year, there's a lot of controversy around the Album of the Year nominations.

The CDs nominated for album of the year are You're the One by Paul Simon; Midnight Vultures by Beck; Two Against Nature by Steely Dan, Kid A by Radiohead, and The Marshall Mathers LP by Eminem.

Not a Mantovanni in the bunch. Let's look at these albums.

Everybody loves Beck, so it's not a big surprise he'd get a nomination -- except that this album, Midnight Vultures, is a really goofy record. It's Beck's Barry White album. He's posing as The Ladies Man over a lot of soul music synthesizers. It's funny and shows a real affection for a certain arcane corner of black music. But it's neither a great Beck album or a great soul album.

Book excerpt: "Zero Fail: The Rise and Fall of the Secret Service"

This week on "Sunday Morning" (January 10)

How does D'Angelo feel? He really is a sexy soul man, and he didn't get a nomination and Beck did.

I would imagine that a lot of the Beck votes will go to Radiohead. They're a British art rock band; they remind a lot of people of Pink Floyd. They're probably better than Pink Floyd, although you have to be careful of saying that in a room full of baby boomers.

This is a genuinely experimental record. The words are very muffled. It sounds like language and music heard by a baby in the womb. This is not a rock album in the way Americans think of rock these days. It's a really beautiful record that sounds like nothing else. It's like slipping into a warm bath in a planetarium. Kid A might deserve to be album of the year, but I don't think it can win.

Two Against Nature is Steely Dan's first album in 20 years, and it picks up right where they left off. It's great to have them back, but I don't know if anyone would say this is their best album. On the other hand, after 20 years, a lot of Grammy voters might feel that any Steely Dan is better than whatever else is out there.

I read a column in the Boston Phoenix that said the nomination of Paul Simon's You're the One showed how reactionary the Grammy voters were. That really got my goat. Pure rock critic snobbery. You're the One is a beautiful album -- great lyrics, great musicianship, great songs. No radio play, because Paul Simon doesn't fit any current radio format, which is an indictment of radio in 2001. This probably does deserve to be the album of the year. However, it's possible that Simon and Steely Dan will split the baby boom vote and throw the election to...

The Marshall Mathers LP by Eminem. This is the giant gorilla at the garden party. Thi album has been denounced in Billboard, on the Op-Ed page of the New York Times. It has sold more copies than the other four nominees put together.

Eminem is a white rapper with a black producer who rhymes like Ogden Nash crossed with Redd Foxx in a slasher movie. It's really offensive stuff about killing women, and hating gays, and his fans killing themselves. Every other word's an obscenity. Needless to say, it's a sensation among teen-agers. (My kids asked if they could buy it. I said no; I won't allow it in our house.)

Having said that, a lot of great musicians and songwriters feel that this is a genuinely important work, that Eminem is a brilliant rapper, that he has more ideas in two minutes than most rappers do in a year. They compare it to Lenny Bruce and Richard Pryor. I think it's more like Don Rickles with Tourettes Syndrome. But this is one of those cases where the people who hate Eminem are so hysterical that I almost find myself rooting for him. Until I put on the record.

Maybe Eminem goes in the same category as Triumph of the Will and Birth of a Nation and Ezra Pound's broadcasts for Hitler. Sometimes, really talented artists promote really ugly ideas. But it seems a little silly that people are denouncing Eminem like Cotton Mather with a can of kerosene while all America lines up to see Hannibal Lecter. It's kind of the same thing.

All the controversy promises to make for an exciting Grammy broadcast. If Radiohead and Beck cancel each other out for the alternative vote and Paul Simon and Steely Dan split the baby boomers, you could very well see Eminem win the Grammy. And if that happens, man, they're gonna tie that poor silly rapper to the dousing stool. George Will will have his thesaurus out, and the liberals will be blaming the gun lobby, and William Bennett will be wringing his hands till his thumbs fly off.

If Eminem wins the Grammy, the pundits and politicians will be chasing him up and down with torches like the Frankenstein monster.

At least, it'll make good television. After all, this is the year of reality TV.