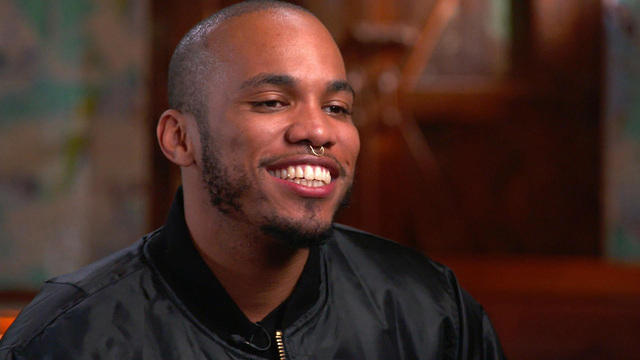 His sound is hard to classify, floating somewhere between R&B and hip-hop, and even that doesn’t quite describe it.

His music is unique – and so is his name: Anderson .Paak. Simple enough, except he puts a dot in the middle.

“The dot is for detail,” .Paak said. “Remind me about work ethic … and pay attention to the small things, you know what I’m saying?”

He’s a very young-looking 30-year-old, and he’s certainly blessed in the confidence department. From the second floor window of his old Los Angeles recording studio, he’s happy to let the world know Anderson .Paak has arrived.

“It’s not super, hyper intellectual, but it’s not dumb fast-food either, you know,” .Paak said. “It’s like good music for smart, sexy people to dance to, you know good high-end art.”

We met at Escala, a restaurant in Koreatown, where he lives with his wife and young son, Soul.

“They gave us a lot of free drinks so we like this place the most,” .Paak said.

There was a time when he needed all the free drinks he could get. He had been struggling at music for years with barely an ear that cared, until one day, his wavy, soulful sound got him the attention of Dr. Dre who asked .Paak to sing on his long-awaited album, “Compton.” It sent .Paak into hip-hop heaven.

“He told me he liked the pain in my voice,” .Paak recalled. “‘You’ve got that pain in your voice. You’ve got a story in your voice when I hear it. It sounds like you. Only you.’”

Turns out .Paak did have a story -- and it was painful.

Growing up in Oxnard, California, he watched his father slide into drug and alcohol addiction, and nearly beat his mother to death.

“He went from being there every day to, I’d only see him a few times a week, and then to the day when I saw him literally on top of my mom, really trying to take my mom’s life, so that was like the last time I seen him,” .Paak said.

His mom married again, only to go to jail herself along with his new stepfather for tax evasion.

“I was used to just ups and downs and seeing things go from happy times to really dark,” .Paak said.

Music was always his refuge. He taught himself the drums, and every Sunday, you could find him playing at his Baptist church. By high school, .Paak was making his own mix tapes and decided to call himself – unfortunately enough – Breezy Lovejoy.

“I thought it was cool, like I thought that girls would like that name for some reason,” .Paak said.

“Did they?” Cowan asked.

Realizing the flaw, he decided to go back to using his given name and began taking music more seriously.

“So what changed?” Cowan asked.

“I had a family to take care of. … And that was huge,” .Paak said. “Once I realized, ‘Oh, it’s not just you, everything you do now affects the life of your child, the life of your wife and they need you.’ So if you’re going to do this music thing, you really gotta do it, and go 100 percent.”

Which to him meant drawing from his past instead of hiding from it.

“All those experiences. All those hardships, the good times and the bad times, that’s the thing, that’s really the Grammy in itself. Those stories, that’s what’s making up the character of you as a person,” .Paak said. “It’s going to give you that flavor, that grease.”

That little boy from Oxnard is now Billboard’s man of the moment. Not even Breezy Lovejoy could have imaged breezing his way to this much success.

Win or lose at the Grammys, Anderson .Paak, the artist with a dot in his name, seems to have already made his mark.

Watch the Grammy Awards this Sunday on CBS.