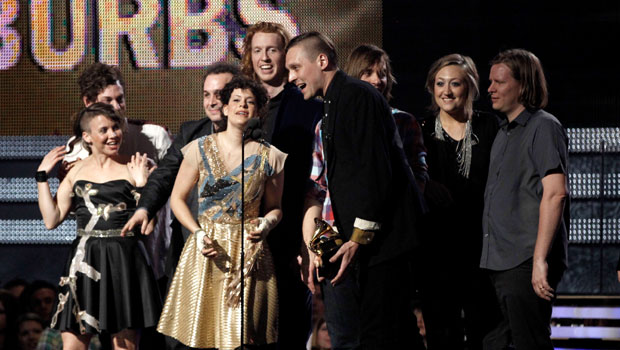 Arcade Fire captured the album of the year award at Sunday night's Grammy Awards for the "The Suburbs," a surprise win that left Eminem shut out in all the top categories.

It was the group's only win of  the night; they had been nominated for two other awards. They beat out Lady Antebellum's "Need You Now," Katy Perry's "Teenage Dream," "The Fame Monster" by Lady Gaga and Eminem's "Recovery" - 2010's best selling album - to take home the trophy.

This is now the third time Eminem has lost the best album trophy. He led all nominees with 10 heading into the night, but won just two awards: best rap album and best rap solo performance.

Lady Antebellum took home five awards, including record and song of the year for its crossover smash "Need You Now," during a ceremony short on trophies but heavy on spectacle performances.

The night also had a huge upset, as Esperanza Spalding beat out Justin Bieber, Florence + the Machine, Mumford & Sons and Drake to win best new artist. She only had only one Grammy nomination coming into Sunday's show and is the first jazz artist to ever win the category.

Lady Gaga's "The Fame Monster" won the award for best pop vocal album, not long after she emerged from the giant, semi-transparent egg she arrived on the red carpet inside to perform her new single "Born This Way."

Christina Aguilera, Jennifer Hudson, Martina McBride, Florence Welch of Florence + the Machine and gospel singer Yolanda Adams kicked off the award show with a tribute to Aretha Franklin, who had surgery for an undisclosed ailment late last year. The Queen of Soul appeared via video and thanked well-wishers for their prayers and cards in a taped segment.

Other performers included Justin Bieber, Usher, Mick Jagger, Eminem, Rihanna, Drake, Bruno Mars, Barbra Striesand, Bob Dylan  and Katy Perry, who debuted video footage from her October wedding to Russell Brand as she sang the ballad "Not Like the Movies."

But the most elaborate performance of the night came from Cee Lo Green. Decked out in colorful feathers and a sequined head cap, he performed a radio-friendly version of his nominated hit "F--- You," with cameos from Gwyneth Paltrow and Jim Henson Co.'s puppets as backup singers.

British rock band Muse performed in its Grammy debut and won best rock album for "The Resistance." The evening's other top winners included Jay-Z, John Legend, and Lady Gaga, who each had three trophies; Miranda Lambert won for best female country vocal performance; and Train took home the award for best pop performance by a duo or group with vocals.