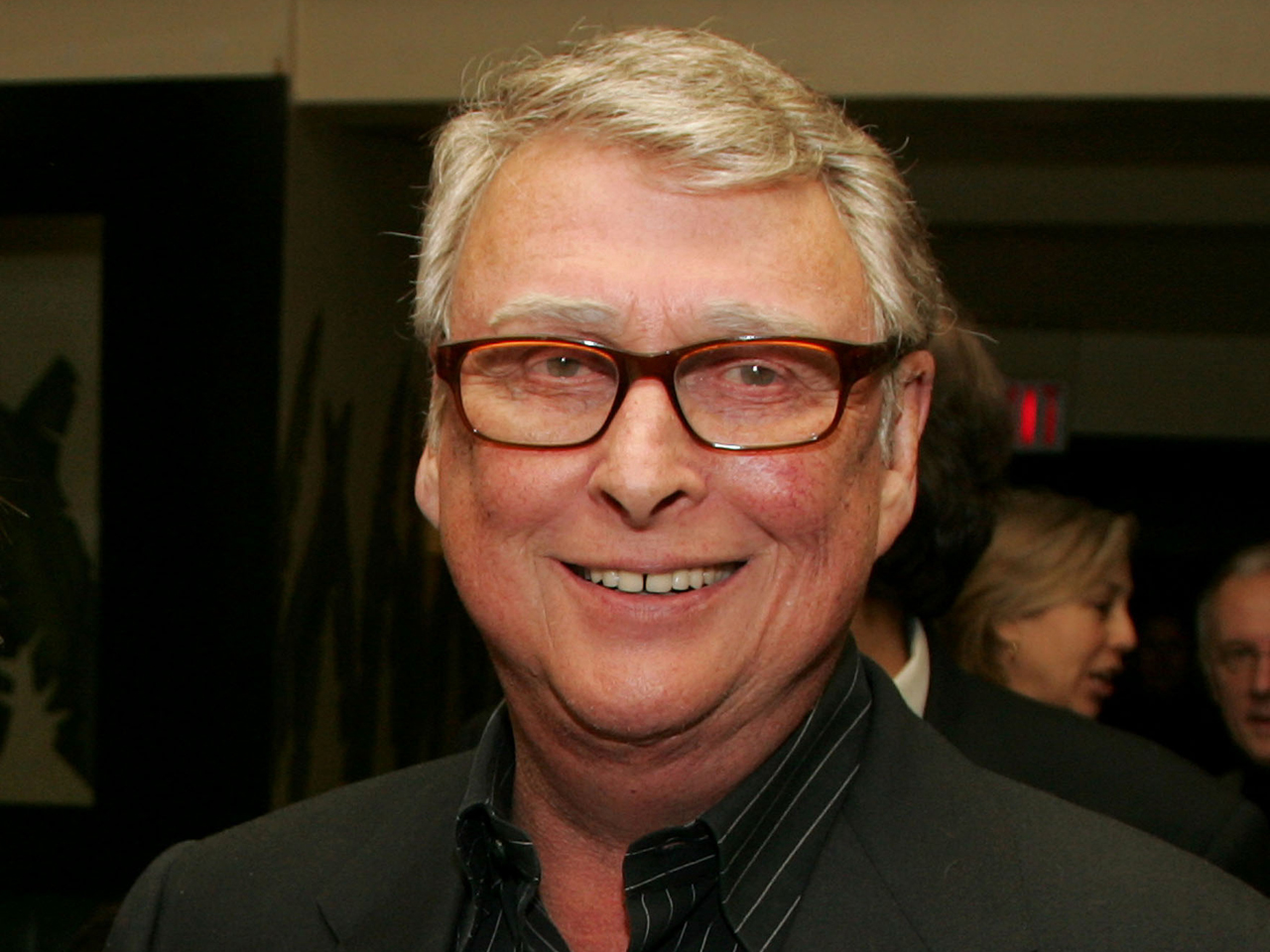 Mike Nichols, a gifted director whose film, TV and stage hits such as "The Graduate," "Working Girl" and ''Angels in America" amplified the aspirations and tragic losses of generations, has died. He was 83.

The Academy Award- and Tony Award-winning director's career spanned more than five decades, and ranged from stand-up comedy with then-partner Elaine May, to Broadway and Hollywood classics of surreal, caustic humor and tortured personal dramas.

The husband of journalist Diane Sawyer, his death was confirmed by ABC News.

Nichols won a Tony Award for directing his very first play, "Barefoot in the Park," and would win seven more Tonys for directing "The Odd Couple," "Luv," "Plaza Suite," "The Prisoner of Second Avenue," "The Real Thing," "Monty Python's Spamalot," and the 2012 revival of "Death of a Salesman." He also won for producing the 1977 musical, "Annie."


He also received an Oscar nomination (one of five throughout his career) for directing his very first film, "Who's Afraid of Virginia Woolf?" (starring Elizabeth Taylor and Richard Burton), and won the Academy Award for his second feature, the Dustin Hoffman classic, "The Graduate."

Nichols, who had a remarkable gift for mixing edgy humor and dusky drama, managed to be both an insider and outsider -- as likely to satirize the elite as he was to mingle with them.

"No one was more passionate than Mike," wrote ABC News President James Goldston in an email announcing Nichols' death.

His 1966 film directing debut, "Who's Afraid of Virginia Woolf?" unforgettably captured the vicious yet sparkling and sly dialogue of Edward Albee's play, as a couple (Richard Burton and Elizabeth Taylor) torment each other over deep-seated guilt and resentment. Taylor won her second Oscar for her performance.


"Angels in America," the 2003 TV miniseries adapted from the stage sensation, blended rich pathos and whimsy in its portrait of people coping with AIDS and looking to the heavens for compassion they found lacking in Ronald Reagan's 1980s America.

Nichols, who won directing Emmys for both "Angels in America" and "Wit," said he liked stories about the real lives of real people and that humor inevitably pervades even the bleakest of such tales.

"I have never understood people dividing things into dramas and comedies," Nichols said in a 2004 interview with The Associated Press. "There are more laughs in 'Hamlet' than many Broadway comedies."

He was a wealthy, educated man who often mocked those just like him, never more memorably than in "The Graduate," which shot Dustin Hoffman to fame in the 1967 story of an earnest young man rebelling against his elders' expectations. Nichols himself would say that he identified with Hoffman's awkward, perpetually flustered Benjamin Braddock.

Mixing farce and Oedipal drama, Nichols managed to capture a generation's discontent without ever mentioning Vietnam, civil rights or any other issues of the time. But young people laughed hard when a family friend advised Benjamin that the road to success was paved with "plastics" or at Benjamin's lament that he felt like life was "some kind of game, but the rules don't make any sense to me. They're being made up by all the wrong people. I mean no one makes them up. They seem to make themselves up."

At the time, Nichols was "just trying to make a nice little movie," he recalled in 2005 at a retrospective screening of "The Graduate." ''It wasn't until when I saw it all put together that I realized this was something remarkable."

Nichols won the Best Director Oscar for "The Graduate," which co-starred Anne Bancroft as an aging temptress pursuing Hoffman, whose character responds with the celebrated line, "Mrs. Robinson, you're trying to seduce me."

Divorced three times, Nichols married TV journalist Diane Sawyer in 1988. He admitted in 2013 that many of his film and stage projects explored a familiar, naughty theme.

"I keep coming back to it, over and over -- adultery and cheating," he says. "It's the most interesting problem in the theater. How else do you get Oedipus? That's the first cheating in the theater."

Not just actors, but great actors, clamored to work with Nichols, who studied acting with Lee Strasberg and had an empathy that helped bring out the best from the talent he put in front of the camera.

"I think a director can make a play happen before your eyes so that you are part of it and it is part of you," he said. "If you can get it right, there's no mystery. It's not about mystery. It's not even mysterious. It's about our lives."

Though known for films with a comic edge, Nichols branched into thrillers with "The Day of the Dolphin," horror with "Wolf," and real-life drama with "Silkwood." Along with directing for television, he was an executive producer for the 1970s TV series "Family."

Nichols' golden touch failed him on occasion with such duds as the anti-war satire "Catch-22," with Alan Arkin in an adaptation of Joseph Heller's best-seller, and "What Planet Are You From?", an unusually tame comedy for Nichols that starred Garry Shandling and Annette Bening.

Born Michael Igor Peschkowsky on Nov. 6, 1931, in Berlin, Nichols fled Nazi Germany for America at age 7 with his family. He recalled to the AP in 1996 that at the time, he could say only two things in English: "I don't speak English" and "Please don't kiss me."

He said he fell in love with the power of the stage at age 15 when the mother of his then-girlfriend gave them theater tickets to the second night of the debut of "A Streetcar Named Desire" starring Marlon Brando in 1947.

"We were pole-axed, stunned. We didn't speak to each other. We just sat like two half-unconscious people. It was so shocking. It was so alive. It was so real," he said. "I'm amazed about our bladders because we never went to the bathroom and it was about 3 1/2 or 4 hours long."

Nichols attended the University of Chicago but left to study acting in New York. He returned to Chicago, where he began working with May in the Compass Players, a comedy troupe that later became the Second City.

May and Nichols developed their great improvisational rapport into a saucy, sophisticated stage show that took on sex, marriage, family and other subjects in a frank manner that titillated and startled audiences of the late 1950s and early '60s.

Their Broadway show, "An Evening With Mike Nichols and Elaine May," earned them a Grammy for best comedy recording in 1961.

The two split up soon after, though they reunited in the 1990s, with May writing screenplays for Nichols' "Primary Colors" and "The Birdcage," adapted from the French farce "La Cage aux Folles."

After the break with May, Nichols found his true calling as a director, his early stage work highlighted by "Barefoot in the Park," ''The Odd Couple," ''Plaza Suite" and "The Prisoner of Second Avenue," each of which earned him Tonys.

Other honors included Oscar nominations for directing "Who's Afraid of Virginia Woolf?", "Silkwood" and "Working Girl," a best-picture nomination for producing "The Remains of the Day," and a lifetime-achievement award from the Directors Guild of America in 2004.

Never one to analyze his career and look for common themes, Nichols would shrug off questions that sought to link his far-flung body of work.

"What I sort of think about is what Orson Welles told me, which is: Leave it to the other guys, the people whose whole job it is to do that, to make patterns and say what the thread is through your work and where you stand," Nichols told the AP in 1996. "Let somebody else worry about what it means."

The family will hold a private service this week; a memorial will be held at a later date, Goldston said.

A spokesperson for ABC

I am writing with the very sad news that Diane's husband, the incomparable Mike Nichols, passed away suddenly on Wednesday evening. He was 83.

In a triumphant career that spanned over six decades, Mike created some of the most iconic works of American film, television and theater--an astonishing canon ranging from The Graduate, Working Girl, and Who's Afraid of Virginia Wolff to Closer, Charlie Wilson's War, Annie, Spamalot, The Birdcage, and Angels in America. He was a true visionary, winning the highest honors in the arts for his work as a director, writer, producer and comic and was one of a tiny few to win the EGOT--an Emmy, a Grammy, an Oscar and a Tony.

No one was more passionate about his craft than Mike. He had recently been immersed in a new project for HBO to adapt "Master Class," Terrence McNally's Tony Award-winning play about opera legend Maria Callas. The project reunited him with Meryl Streep, one of his most frequent collaborators. She once said of Mike, "no explanation of our world could be complete and no account or image of it so rich, if we didn't have you," in hailing him as one of the essential artists of our time.

One of the world's greatest playwrights, Tom Stoppard, said, "He is a giver. He's good at comfort and joy. He's good at improving the shining hour and brightening the dark one, and, of course, he's superlative fun...To me he is the best of America."

Mike had a sparkling wit and a brilliant mind. Beloved by so many in film, television and Broadway, there was no greater joy in his life than his family, and of course our own Diane Sawyer. A true and beautiful love story, Mike and Diane were married for 26 years. He leaves behind three children--Daisy, Max and Jenny--and four wonderful grandchildren.

I know many of you will want to share your condolences with Diane. The family will hold a small, private service this week, and a memorial will be held at a later date. Until then, please join me in keeping Diane, Mike's children, grandchildren and their families in your thoughts.