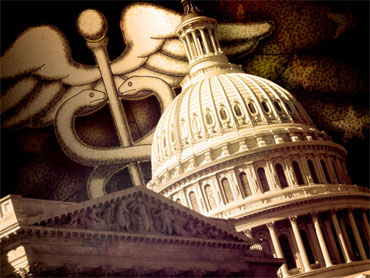 The claim that the health care overhaul bill reflects a "government takeover of healthcare" has won the "lie of the year" award from the fact-checking website Politifact.com.

The Pulitzer Prize winning website, which is associated with the St. Petersburg Times, noted in announcing the award that "it is inaccurate to call the plan a government takeover because it relies largely on the existing system of health coverage provided by employers."

"It is true that the law does significantly increase government regulation of health insurance. But it is, at its heart, a system that relies on private companies and the free market," the site said.

Politifact noted that it is not weighing in on the validity or effectiveness of the health care law itself, but rather on the truthfulness of the characterization of it. It noted that under the bill a majority of Americans will continue to get health coverage from their employers through private insurance companies, that the government did not take control over hospitals or doctors, and that the law did not include a public option, whereby a government run insurance plan would compete with private companies.

According to the Politifact report, the claims was first pushed by Republican consultant Frank Luntz, as early as the spring of 2009. In a 28-page memo calling for Republicans to use the phrase, Luntz wrote, "Takeovers are like coups. They both lead to dictators and a loss of freedom."

According to PolitiFact, this phrase "government takeover of health care" was "uttered by dozens of politicians and pundits, it played an important role in shaping public opinion about the health care plan and was a significant factor in the Democrats' shellacking in the November elections." The phrase appears on incoming House speaker John Boehner's website at least 90 times and shows up more than 200 times on the Repbulican National Committee's website.

"Republicans who maintain the Democratic plan is a government takeover say that characterization is justified because the plan increases federal regulation and will require Americans to buy health insurance," added PolitiFact.

Slate, Factcheck.org and the New York Times have also deemed the claim false.

"Yes, there would be a substantial government-mandated reorganization of this relatively small corner of the private health insurance market," the Times wrote. "But that hardly constitutes a government takeover of American health care."

PolitiFact argues the false claim was reinforced by media coverage, with "government takeover" mentioned 28 times in the Washington Post, 77 times in Politico and 79 times on CNN in 2010. It suggests part of the success of the phrase was tied to the fact that Democrats did not offer a resonant catchphrase of their own.

PolitiFact's 2009 Lie of the Year was the suggestion that the bill included "death panels." The site also offered runners up this year, including claims by Democrats that Republicans were calling for the privatization or phasing-out of Social Security.