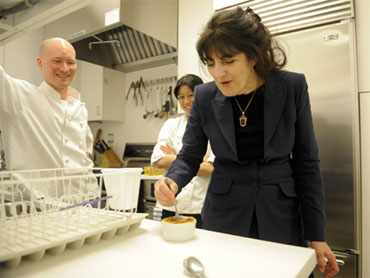 After nearly 70 years of fine eating, the lavish meal known as Gourmet magazine is over.

Conde Nast blamed the tough economic climate Monday when it told its staff it was closing the stalwart of the food media world, long considered the dean of culinary publishing.

"It's the center of gravity, a major planet that's just disappearing," said chef and author Anthony Bourdain, who said Gourmet was the first food publication to give him a chance as a writer. "There's been a lot of speculation about this happening, but I'm still stunned."

Conde Nast also said it was shuttering Modern Bride, Elegant Bride and Cookie, a parenting magazine. Earlier in the year it ceased publication of Portfolio, a business magazine, and Domino, a homes title. Sister Conde Nast publication Bon Appetit survived the cuts, and will likely absorb many of Gourmet's readers.

For those in the food world, the closure is a bit like waking up to find the old Life magazine had closed shop.

"It's certainly the grand dame of food magazines," said Tim Ryan, president of the Culinary Institute of America. "We'll never see the likes of a Gourmet magazine in that form again."

Since 1999, Gourmet has been headed by Ruth Reichl, a doyenne of the food world and former New York Times restaurant critic. Reichl ushered the magazine firmly into the 21st century, overseeing launches of award-winning Web sites and television series.

More than just a cooking magazine, Gourmet explored the culture - and increasingly the politics - of food.

It was that connecting of the dots between policy, the environment and the dinner table that food writer Michael Pollan, author of "The Omnivore's Dilemma," most lamented losing.

"They were reaching an audience that wasn't sensitive to the political and ecological implications of their eating," he said in an e-mail. "It was largely a hedonistic community that Ruth introduced to some hard issues."

In a memo to staff Monday, Conde Nast CEO Charles Townsend said the company would remain committed to Gourmet's book-publishing and television franchises and keep its recipes on the popular Epicurious.com.

It was unclear what would become of the magazine's Web site, and Conde Nast spokeswoman Maurie Perl said it is still uncertain whether Reichl will stay with the company. The editors of the other three shuttered publications will be leaving, among roughly 180 employees cut.

Few expect another publication - virtual or otherwise - will fill the vacuum. Magazines that do rise from the rubble probably will reflect the newer trends in food publishing, driven by personalities and brands, such as Martha Stewart's Everyday Food and Food Network Magazine.

The greatest casualty may be the long-form food journalism favored by Gourmet, said Dana Cowin, editor-in-chief of Food & Wine, another of food publishing's Big Three, along with Gourmet and Bon Appetit.

"Ruth definitely devoted a lot more space, time and interest to literary writing and it's a shame to see that go," Cowin said. "You're not going to see that on a blog and when you use a recipe search tool."

Since its launch in 1941, Gourmet weathered repeated upheavals of the American food scene. At its inception, people ate local and seasonal because, well, that's all there was. When processed food supplanted the farm stand, Gourmet marched on.

And when food morphed from meal to movement and Americans ate local and seasonal as a political statement, Gourmet was there.

During Reichl's time at Gourmet, she saw the rise of the locavore movement - people eating locally produced foods - and molecular gastronomy, the art of preparing foods with chemistry and physics instead of traditional cooking techniques. She highlighted both trends in her first issue a decade ago.

But in recent years, how Americans got their food media also changed. Despite Gourmet's robust Web presence, keeping a bricks-and-mortar publication afloat proved too taxing.

"The transition from hard paper to the Internet is not as easy as it should be," said celebrity chef Bobby Flay. "We just take it as a sign of the way things are going to be now."

Gourmet's demise also illustrates the change in how power is held in the food world. The ability of print media to make - or break - anything is waning. Increasingly, it is the viral aspect of social networking and blogging that gives rise to new faces, places and flavors.

And in perhaps a nod to that, Reichl's first public comment after the announcement was made via Twitter.

"Thank you all SO much for this outpouring of support. It means a lot," she wrote. "Sorry not to be posting now, but I'm packing. We're all stunned, sad."