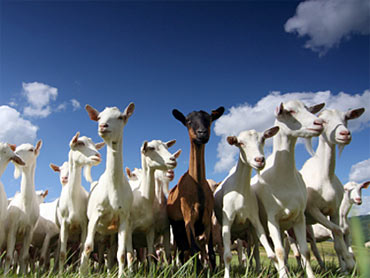 (CBS/AP) PATERSON, N.J. - First of all, you need to know that it is illegal to keep farm animals in Paterson, New Jersey, a somewhat gritty city in the northern part of the state.

Which makes police wonder how it came to be that they found themselves herding five goats wandering the streets in the wee hours Thursday.

Chief Animal Control Officer John DeCando tells The Record newspaper that a woman called Paterson police after nearly hitting the herd with her car at 2:30 a.m.

Police rounded up the goats and shepherded them to an animal shelter. They'll stay there until they can be sent to a farm to live out their days.

A close call, according to officer DeCando, who says he believes someone was keeping them for an Easter meal or a sacrifice.