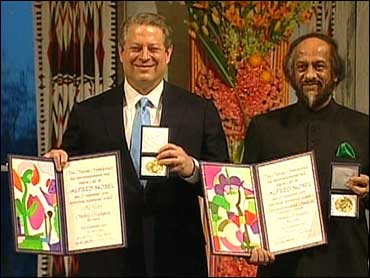 "The new president, whichever party wins the election, is likely to have to change the position on this climate crisis," Gore told The Associated Press in an interview before the Nobel Prize ceremony. "I do believe the U.S., soon, is to have a more constructive role."

Gore said it was not too late for the administration of President George W. Bush to join efforts to draft a new global treaty limiting greenhouse gas emissions.

"I have urged President Bush and his administration to be part of the world community's effort to solve this crisis," Gore said. "I hope they will change their position."

This morning Gore received the 2007 Nobel Peace Prize for his work in educating the public and world leaders about the ramifications of global warming and the urgency to take steps in reducing emissions of greenhouse gases.

In accepting the prize he shared with the U.N.'s Intergovernmental Panel on Climate Change, the former vice president said humanity risks sliding down a path of "mutually assured destruction."

"It is time to make peace with the planet," Gore said in his acceptance speech that evoked Churchill, Gandhi and the Bible. "We must quickly mobilize our civilization with the urgency and resolve that has previously been seen only when nations mobilized for war."

"We, the human species, are confronting a planetary emergency - a threat to the survival of our civilization that is gathering ominous and destructive potential even as we gather here," Gore said at the gala ceremony in Oslo's city hall, in front of Norway's royalty, leaders and invited guests.

The United Nations panel was represented at the ceremony by its leader, Rajendra Pachauri.

In his acceptance speech today, Gore urged nations to impose a CO2 tax, and called for a moratorium on the building of new coal plants without the capacity to trap carbon.

He directed special attention to the United States and China, the world's biggest emitters of carbon emissions.

Read Al Gore's Nobel Prize Acceptance Speech
"While India is also growing fast in importance, it should be absolutely clear that it is the two largest CO2 emitters - and most of all, my own country - that will need to make the boldest moves, or stand accountable before history for their failure to act," Gore said.

"Both countries should stop using the other's behavior as an excuse for stalemate and instead develop an agenda for mutual survival in a shared global environment."

His remarks came as governments met in Bali, Indonesia, to start work on a new international treaty to reduce climate-damaging carbon dioxide emissions. Gore and Pachauri plan to fly there Wednesday to join the climate talks.

The governments hope to have a new pact to succeed the Kyoto accord in place by 2012, but Gore has said the urgency of the problem means they should aim to come to an agreement by 2010.

The Bush administration opposed the Kyoto treaty on climate change, saying it would hurt the U.S. economy and objecting that fast-developing nations like China and India were not required to reduce emissions.

At the Bali conference, representatives of the Bush administration last week dismissed calls for mandatory reductions in emissions called for by other nations, scientists and environmental advocates. "We will not alter our posture here," said Harlan Watson, the president's representative at the talks.

Pachauri described in his speech today how a warming climate could lead to flooding of low-lying countries, disruptions to food supply, the spread of diseases and the loss of biodiversity.

The impact "could prove extremely unsettling" for the world's poor and vulnerable, he said, and ended his speech with a question for the Bali conference: "Will those responsible for decisions in the field of climate change at the global level listen to the voice of science and knowledge, which is now loud and clear?"

Each Nobel Prize includes a gold medal, a diploma and a $1.6 million cash award.

The Nobel Prizes, first awarded in 1901, are always presented Dec. 10, the anniversary of the death of their creator, Swedish industrialist Alfred Nobel.

The ceremony Monday will be followed by a parade and banquet in the winners' honor, and the traditional Nobel peace concert on Tuesday.

The other Nobel awards - in medicine, chemistry, physics, literature and economics - will be presented at a separate ceremony in Stockholm, Sweden.

Speaking in a suite at the Grand Hotel in downtown Oslo prior to the ceremony, Gore said "Fate does not always give us the choice we'd like to make.

"I am under no illusion that there is a position in the world with as much potential for influencing the future as president of the United States, but that was not to be."

Despite the outcome of the disputed Florida vote count which was halted by the Supreme Court's decision in Bush v. Gore, the former vice president said he was "grateful I found a way to play a useful role in helping to form the world's resolve to solve this crisis," following the 2000 election.

The 59-year-old politician turned climate campaigner repeated that he had "no plans" to run for the U.S. presidency again.