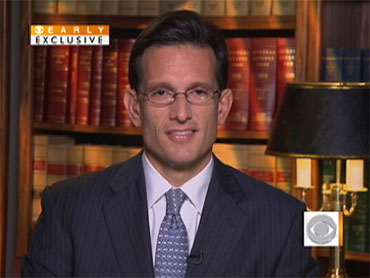 In local races across the country, Republican candidates have been running a national race. They're not just campaigning against their opponents for Congress; they've been painting vulnerable Democrats as being too closely tied to their party's leadership - and defining them on health care, the economy, and jobs.

In Washington State, an ad for Republican Senate candidate Dino Rossi paints the Democratic incumbent as too cozy with the president and Democratic leaders in Congress.

"If you watched the ads, you would think President Obama was on the ballot and Nancy Pelosi was on across the nation as well," said University of Virginia political analyst Larry Sabato.

Until now Democrats have avoid nationalizing this race around a couple of central themes, reports CBS News Congressional correspondent Nancy Cordes. They thought they would have better luck fighting each race on its own terms.

Now, says Cordes, Democrats are stealing a page from the GOP playbook, and are developing their own theme: In race after race, they're painting their Republican opponents as extremists, and dangerous.

"Sharron Angle: Too dangerous to have real power over real people," says an ad for Sen. Harry Reid in Nevada.

Some Democrats have also been using their debates to label their opponents as outside the mainstream.

"What I'm most concerned about are those extreme candidates that are actually taking advantage of extreme fringe of the Tea Party," said Senate candidate Joe Sestak, running against Pat Toomey in Pennsylvania.

"My job is to create jobs; what she's talking about is extreme," said Harry Reid.

"You're gonna see that Karl Rove and the independent expenditures that are fueling Congressman Kirk's commercials every single day are having a dangerous impact on the future of our democracy," said Senate candidate Alexi Giannoulias in Illinois.

On CBS' "The Early Show" this morning, Rep. Eric Cantor, the Republican Minority Whip, denied that Tea Party-backed candidates are too extreme, and instead labeled Democrats as extremists.

"This election is not about personalities," Cantor told anchor Maggie Rodriguez. "People are really upset, they're frustrated at their economic circumstance, they're tired of the spending in Washington. And what our Republican candidates are talking about on the campaign trail is cutting spending, reining in the size of government and doing what we have to do to remove the uncertainty so people can get back to work.

"There's no question these 'Tea Party Republicans' are outside the Republican mainstream," said Rodriguez. "Many of them lack political experience. But yet they are the energy that may just drive the Republicans back into power, especially in the House. And you may find yourself in a tricky position . . . feeling indebted to these candidates while trying to keep them in line. How would you balance that?"

"Maggie, I differ with you to say that the people affiliated with the Tea Party across this country are outside the mainstream," Cantor replied.

"These are people, Maggie, that are concerned about fiscal state of our country. Remember what the Tea Party acronym stands for - it's Taxed Enough Already. People are tired of people of Washington spending the money we don't have, they're tired of seeing the expanse of government into almost every aspect of our lives, and, frankly, they want to see us return to the America that has always stood as a beacon of prosperity to the world."

"We're at a crossroads here, Maggie. I think people begin to understand that when they've been out of work as long as they have. We've got to address the fiscal situation, cut the spending and get people back to work.

"So, am I to understand that you believe that the Republican Party's views in general and the Tea Party's views are one and the same?" asked Rodriguez.

"What I would say, Maggie, is most of the independents in this country, and the races that I'm seeing, are aligning themselves with the same notion that they're so frustrated to see that Washington's just not listening to the people.

"This administration and the Obama-Pelosi agenda that has been unfolded over the last 20 months is the extreme agenda," Cantor said. "That's what people don't recognize. They don't recognize an America that has a federal government that they're now scared of. That's where the people are. The people want to see a Washington that will listen again. They want to see leaders in Congress to make sure that their fellow government starts working for the people again and not the other way around."

Although some polls are showing support increasing for Democratic candidates in key races, Cantor said he was optimistic ("with caution") that "Republicans are going to have a great night on November 2nd."