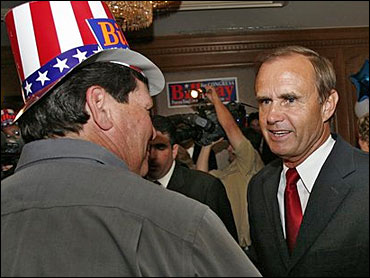 A former Republican congressman narrowly beat his Democratic rival early Wednesday to fill the House seat once held by jailed Randy "Duke" Cunningham, one of several contests in eight states closely watched as a possible early barometer of next fall's vote.

No one predicted that a Democrat should have even had a chance with voters in the 25-year long Republican stronghold, CBS News correspondent Jerry Bowen reports.

With 96 percent of precincts reporting, Bilbray had 58,566 votes, or 49 percent, to Busby's 53,598 votes, or 45 percent. "I think that we're going back to Washington," Bilbray told cheering supporters.

"I think it just shows that there's a lot of turmoil out there," CBS Evening News anchor and Face the Nation host Bob Schieffer said. "No, the Democrats didn't win. But I mean, in that particular district, if a Democrat got elected, it would be like George Wallace winning a seat in Harlem or something like that."

"Who knows what's going to happen, but this has to be a sign to Republicans that they might lose the House, I think," Schieffer said on CBS News' The Early Show.

Bilbray and Busby expect to run against one another one more time in November, when the issues will likely be much the same, Bowen reports.

"You've given me a chance to fight for you, for the California of our dreams, and I will not let you down," Angelides said while his supporters chanted, "Go, Phil, go!"

The race proved long on negative ads and short on excitement and attention, giving the Republican governor a timely lift as he publicly launches his re-election drive Wednesday.

Riley said voters saw state government has changed while he has been in office. "People appreciated the difference in the level of corruption we had in the past and the corruption we don't have today," he said. His challenger, Moore, the former state chief justice who became a hero to the religious right in 2003 when he was ousted after refusing to remove the Commandments monument from the state judicial building, said: "God's will has been done."

Baxley is trying to become Alabama's second female governor and the first elected in her own right. Alabama's first woman governor, Lurleen Wallace, was elected in 1966 as a stand-in for her husband.

"There was a time in this state when I could not have stood here, in spite of how hard I worked, because of gender. Tonight proves that is gone forever," Baxley told cheering supporters.

Another Washington corruption case figured in Montana's primary, where GOP Sen. Conrad Burns won the nomination for a fourth term. After his ties to disgraced lobbyist Jack Abramoff became known, Burns saw his popularity fall. But he beat several primary challengers and won nearly three-quarters of the vote. His Democratic challenger in the fall will be state Senate President Jon Tester.

In Iowa, the retirement of two-term Democratic Gov. Tom Vilsack set off a wide-open race. Secretary of State Chet Culver will face GOP Rep. Jim Nussle in the fall.

Mississippi, Montana, New Mexico and South Dakota also held primaries. Corruption and allegations of corruption — in California, Alabama and Montana, crisscrossed the country. Immigration was a campaign issue from the South to the Plains.

Still, the biggest race was the one to replace Cunningham, who was sentenced to eight years in prison for taking bribes on a scale unparalleled in the history of Congress.

Bilbray, made immigration the centerpiece of his campaign, proposing a fence "from the Pacific Ocean to the Gulf of Mexico" and restrictions to keep illegal immigrants from collecting Social Security and other benefits.

Busby focused her campaign on public dissatisfaction with the Bush administration and the GOP-led Congress, and assailed Bilbray for working as a lobbyist in Washington. She consistently referred to him as "the lobbyist Bilbray."

A few races brought back some familiar names: