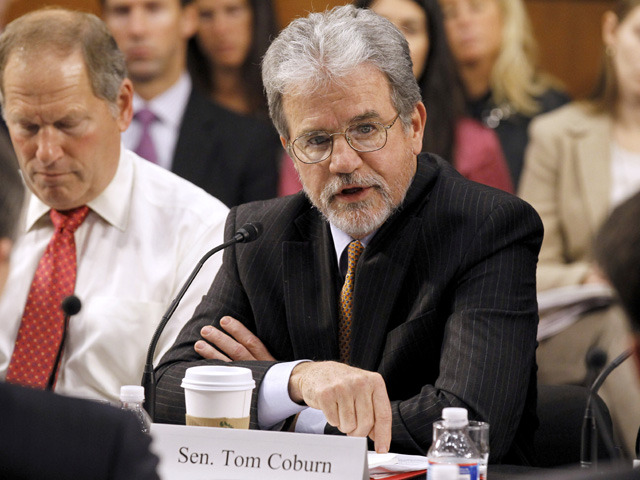 Sens. Tom Coburn and Mike Crapo, Republican members of President Obama's deficit-reduction commission, have announced their support for a proposal for reducing the U.S. deficit, unveiled yesterday by Democrat Erskine Bowles and Republican Alan Simpson, co-chairmen of the National Commission on Fiscal Responsibility and Reform.

With the support of Coburn and Crapo, the commission now has nine of the 14 votes needed to submit the plan to Congress for a vote - but many believe that the likelihood of achieving 14 votes is slim.

In a joint statement on Thursday, Coburn and Crapo, two of the Senate's more conservative members, emphasized that though imperfect, the plan would help avert what could evolve into a national disaster.

"We can't afford to wait until the next election to begin this process," Coburn and Crapo said. "Our debt crisis is a threat to not just our way of life, but our national survival. History has not been kind to great nations who borrowed and spent beyond their means. Doing nothing will, sooner rather than later, guarantee that this nation becomes a second-rate power with less opportunity and less freedom."

"The plan developed by the debt commission, while flawed and incomplete, will help America avoid this fate and secure freedom for future generations," the statement continued.

The proposal, co-authored by Bowles and Simpson, would cut the deficit by nearly $4 trillion over the next nine years, but the means of doing so -- which include major spending cuts, tax increases, an overhaul in Social Security, and raising the retirement age -- has been a source of controversy on both ends of the political spectrum.

Rep. Paul Ryan, the Wisconsin Republican and incoming House Budget chairman, said earlier today that while he supported the bipartisan effort, he will vote against the proposal because it made health care "dramatically worse," according to Roll Call.

"Obviously, I'm not going to vote for it," Ryan told reporters, arguing that the plan "not only didn't address the elephant in the room, health care, it made it fatter."

Commission member Jeb Hensarling (R-Texas), the incoming GOP conference chairman, has also indicated that he will also vote against the proposal.

Democrat Senator Max Baucus, of Montana, and Republican Rep. David Camp, of Michigan, both released statements on Thursday afternoon saying that they, too, would vote against the recommendations.

"I have studied the Deficit Commission recommendations at length - and I can tell you they are wrong for Montana and wrong for rural communities across the country," said Baucus, the chairman of the Senate Finance Committee.

"Reducing our federal deficit is imperative, but we cannot cut the deficit at the expense of veterans, seniors, ranchers, farmers and hard-working families," he continued. "These recommendations are wrong for our state, they are wrong for our country, and I simply can't support them."

House Budget Committee Chairman John Spratt Jr., a South Carolina Democrat, has yet to announce a decision, but the Associated Press reports that he is leaning in favor of support for it.

Some Democrats, however, believe the proposed plan ignored issues surrounding economic inequality in the United States - a perspective supported by liberal groups such as MoveOn.org and the AFL-CIO, both of which have urged commission members to reject the plan.

According to the AP, Democratic Illinois Senator Dick Durbin is still deliberating on the matter.