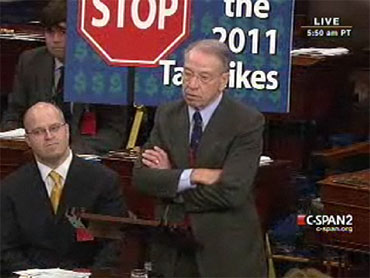 Republicans in the Senate shot down two Democratic plans to extend Bush-era tax cuts to the middle-class, because the proposals did not also extend them for the wealthiest two percent of Americans.

After two hours of debate, cloture vote failed to gain the 60 votes necessary to bypass a filibuster.

On a plan to renew tax cuts for all filers with incomes of less than $1 million, the vote was 53-37.

Both plans would let tax rates for high-income Americans return to tax rate levels that were in place during the Clinton administration.

Republicans, pushing for making tax cuts for the rich permanent, had vowed to defeat both bills.

President Barack Obama, having returned to Washington from a surprise trip to Afghanistan, said he was "very disappointed" by the Senate's failure
to agree to legislation passed in the House that would make middle-class tax cuts permanent.

The Senate debate was a showdown over whether the wealthy should be excluded from an extension of the Bush-era tax cuts.

"These votes today are not going to settle anything," says CBS News Capitol Hill correspondent Bob Fuss, "but Democrats want to make a political point: Republicans are so determined to preserve tax cuts for the wealthy, they'll block them for everyone else."

Democrats already eyeing the 2012 elections are using the debate to depict Republicans as guardians of the rich who are willing to jeopardize middle class families in order to further fatten the accounts of the wealthiest Americans.

Sen. Bernie Sanders, I-Vt., called out Republicans for pushing tax breaks for the wealthy after "time and time again coming down to the floor of the Senate and saying, 'We have a huge deficit! We have a huge national debt!'

"And today what they want to do is drive that national debt up by $700 billion over the next ten years.

"Let's not give tax breaks to millionaires who in many ways have never had it so good," he said.

Sen. John Kyl, R-Ariz., responded by saying Sanders' comments were indicative of why bipartisan compromise was not possible in Washington.

"It's not Republicans' fault that these things take time and we still haven't resolved the tax issue," Kyl added.

Sen. Mark Begich, D-Aka., said neither side should blame the other for the tax impasse, but said Republicans were throwing confusing numbers about the impact on small business.

Ninety-five percent of small businesses, he said, gross a million dollars and year and under, and would not face a tax hike under the Democrats' plans.

"If you support the efforts of small business," he said, "don't be confused by their one-liners."

Senate Republican leader Mitch McConnell of Kentucky labeled today's session as "show votes" and a waste of time and money.

"They're demanding that the wealthiest Americans will get a tax cut that is one thousand times the size of the average American's," Dorgen said.

"There is no level the minority will accept," said Dorgen, if it does not also include "Bill Gates, Donald Trump, everyone."

And the point that the tax breaks for the rich would have to be paid for by borrowing billions of dollars he called "preposterous."

On Friday Sen. Claire McCaskill., D-Mo., said Republican lawmakers were ignoring he fiscal concerns of their own Tea Party advocates. "All those people out there in the Tea Party that are angry about the economics of Washington, they really need to look at this," she said.

"They need to pull back the curtain and realize that you've got a Republican Party that's not worried about the people in the Tea Party - they're worried about people that can't decide which home to go to over the Christmas holidays."

"All of this finger-pointing is doing nothing to create jobs," said McConnell. "It's a total waste of time."

Noting that unemployment had risen to 9.8 percent, he added: "Democrats are responding with a vote to slam job creators with a massive tax increase. Millions of out-of-work Americans don't want show-votes or finger-pointing contests. They want jobs."

The White House has been negotiating privately with Republicans on a broader bill that would include both tax cuts for the wealthy and Democratic priorities, such as an extension of jobless benefits for the long-term unemployed and an extension of additional expiring tax breaks for lower- and middle-income workers even if they don't make enough to owe the IRS money. College students would also benefit under the White House's proposals, as would companies that hire the unemployed.

Also part of the discussions is a possible increase in the federal debt limit, which allows the government to continue to borrow to meet its financial obligations.

President Barack Obama has come under attack from progressives who are demanding that he not "cave" in the Republicans' demands, after having said that the U.S. could not afford to extend tax cuts for the rich.

In the weekly White House radio and Internet address, Vice President Joe Biden, skipped lightly over Mr. Obama's willingness to negotiate with the GOP on the Bush-era tax breaks.

"We've got to extend the tax cuts for the middle class that are set to expire at the end of the month," he said. "If we don't, millions of middle-class families will see a big bite out of their paychecks starting January 1. And that's the last thing we should let happen."

"And the second thing we've got to do is extend unemployment insurance for Americans who have lost their jobs in a tough economy," Biden said.

Delivering the Republican address, Sen. Mark Kirk of Illinois, who was sworn into office this week, said voters in the midterm elections demonstrated their distaste for any tax increases.

"The current leaders of Congress should not move forward with plans that were just rejected by the American people," he said. "These leaders should not raise taxes and risk another recession. Instead, Congress should reduce spending and prevent another tax hike on American taxpayers."