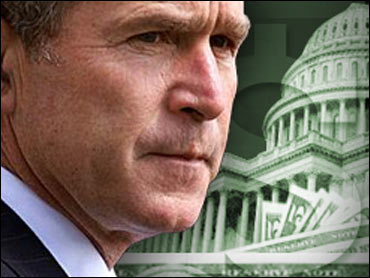 A plan to give stockholders at least $500 in tax-free dividends won the support of GOP moderates worried about growing deficits, improving the prospects for a scaled-back version of the president's tax cut.

The Senate Finance Committee was scheduled Thursday to debate the legislation, which also includes $20 billion in aid to fiscally strapped states.

The plan to cut taxes $350 billion through the coming decade faces dozens of amendments emphasizing Democratic priorities, such as unemployment benefits.

But the bill now enjoys the support of moderates on the committee after Chairman Charles Grassley, R-Iowa, included $20 billion in state aid and agreed to rewrite the largest and most debated proposal the president offered — a $400 billion plan to eliminate taxes on dividends.

"The agreement seems to be what I've been hoping for — a robust tax cut that gives the economy a needed shot in the arm without shooting the deficit in the foot," said Sen. George Voinovich, R-Ohio.

Adopting an idea put forward by moderate Republican Olympia Snowe of Maine, who refused to support earlier versions of the bill, Grassley agreed to exclude $500 in dividend income from taxes. That will eliminate dividend taxes for 86 percent of corporate shareholders.

The legislation will offset the cost of the dividend tax cut, more than $80 billion over a decade, with increased revenue, including money from closing corporate tax shelters and extending customs fees.

"We've designed a limited dividend proposal, which will establish the basis for long-term economic growth, paid for with legitimate offsets," Snowe said.

Conservatives said they will try to enlarge the dividend tax cut during later debate.

The rest of the bill will increase the $600 child tax credit to $1,000 and reduce taxes for married couples. Small businesses would be able to write off $75,000 in expenses. All the tax cuts continue through 2013.

The bill would cut taxes by more than $430 billion, but the net cost to the Treasury would be $350 billion.

House tax writers also decided to speed up income tax rate cuts planned for later this year. But other benefits, including the $1,000 child tax credit and tax cuts for married couples, end in three years to keep the cost of the legislation within a $550 billion budget.

The House plans to debate its legislation Friday.