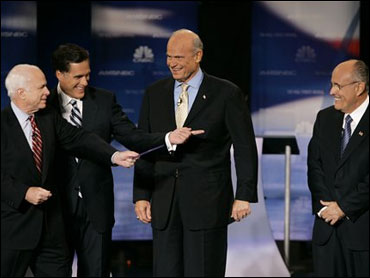 Seeking to win over a key constituency that has exhibited signs of dissatisfaction with their current choices, Republican presidential candidates will converge on Washington this weekend for a chance to connect with around 2,000 influential members of the Christian conservative community - a group that could effectively decide the GOP nomination in early 2008.

The Family Research Council's Washington Briefing - better-known as the Values Voter Summit - will include speeches from all the Republican candidates, as well as a straw poll that could serve as a gauge of each candidates' strength within this crucial group. Though the number of expected attendees is relatively small, FRC's president, Tony Perkins, says the event's impact can extend far beyond Washington.

"These are the influencers, these are the talkers," Perkins said of the attendees that will take over the Washington Hilton hotel. "This could be when things start to shake out and a candidate begins to emerge with a certain level of support. I don't think anybody's going to walk away with a lock, but maybe one or two candidates, maybe three, will begin to take off with strong support from the base."

That no candidate has yet locked up the support of evangelicals may be one of the most interesting facets of the summit. In 2000, Christian conservatives were quick to rally around George W. Bush and stuck with him, helping him win two terms in office. But now, with the Iowa caucuses less than three months away, no single candidate has emerged as the favorite of social conservatives - making this weekend's summit all the more important.

Of the top four Republicans in the race, none has come close to becoming a true standard bearer for evangelicals. Mitt Romney sounds the right note on issues like abortion and gay marriage, but his recent rightward leaps on those issues, and his Mormon faith, have generated skepticism. John McCain has also been a reliable conservative vote, but has never been strongly identified with the evangelical base. Fred Thompson was once hyped as the candidate conservative voters have been waiting for, but his campaign has stumbled out of the gate after a late start.

And then there's Rudy Giuliani, who, as Perkins said, "is in a class by himself." Giuliani is Catholic, but supports abortion rights and expanded gay rights during his tenure as New York mayor - stances that are anathema to evangelical voters. He was the last major Republican candidate to accept the invitation to speak at the summit. Perkins said Giuliani can score points this weekend, but not too many.

"I don't think there's any risk of him winning the straw poll there this weekend, but I think he's a winner for coming, to be honest," Perkins said. "Had he not come it would have been a really bad political mistake."

Among the second-tier contenders, the only one who is cozy with the party's conservative Christian wing is Mike Huckabee, especially with Sen. Sam Brownback departing the race. Huckabee, who is a Baptist minister as well as a former Arkansas governor, has had trouble gaining traction since his second-place finish in the Ames, Iowa straw poll in August.

But that may not matter much to those in attendance this weekend, nor will the high poll numbers and large war chests of the front-runners, Perkins said. "For the rank and file conservatives, viability is not an issue," he said. "In the 1999-2000 election, I supported Gary Bauer because he was right on all the issues." Bauer now heads the conservative organization American Values, one of the co-sponsors of the Values Voter Summit.

While Perkins said he couldn't predict which candidate - or candidates - would emerge from the Summit with momentum headed into the closing months of the primary campaign, he sounded confident that evangelical voters' days of indecision would soon come to an end. "They've been doing window shopping and I think they're ready to buy," he said.