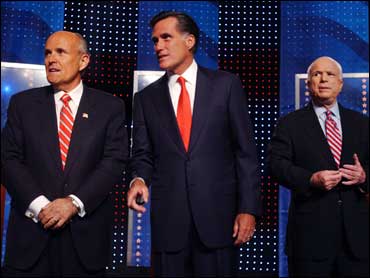 Republican presidential contenders voiced support for the Iraq war despite a warning from anti-war candidate Ron Paul that they risk dragging the party down to defeat in the 2008 elections.

"Even if we lose elections, we should not lose our honor," shot back former Arkansas Gov. Mike Huckabee, "and that is more important to the Republican Party."

Huckabee was in the majority, Paul very much in the minority on the debate stage Wednesday night when it came to the war, a politically unpopular conflict that has emerged as the dominant issue of the 2008 race for the presidency.

The issue flared near the end of a 90-minute encounter in which all eight men on stage welcomed former Sen. Fred Thompson, an actor who starred on the television show "Law & Order," to the race with barbed humor and pointed advice.

The debate unfolded several days before Gen. David Petraeus is scheduled to deliver an assessment of President George W. Bush's decision to commit 30,000 additional combat troops to give the Iraqi government time to develop.

Sen. John McCain, former Massachusetts Gov. Mitt Romney and Giuliani were among those who stressed their support for the war, at times even competing to show their commitment.

"The surge is apparently working," said Romney, referring to the increase in troops.

That brought an instant rebuke from McCain, who said, "The surge is working, sir, no, not 'apparently.' It's working."

Alone among those on stage, Paul, a veteran congressman with a libertarian streak, made the case for withdrawing troops. That drew a sharp challenge from Chris Wallace, one of the debate questioners, who asked whether the United States should take its marching orders from al Qaeda.

"No! We should take our marching orders from our Constitution," Paul shouted back, pointing his pen at Wallace for emphasis. "We should not go to war without a declaration" by Congress.

There was no debating whether it was important to cut taxes and spending, although McCain and Giuliani defended their refusal to sign a pledge not to raise taxes.

The debate ranged over familiar issues, and each of the men on stage looked for moments to appeal to their target constituents.

Huckabee, eager to win the support of social conservatives, said he supports a "human life amendment" to outlaw abortion.

By contrast, Giuliani supports abortion rights and Romney favors allowing states to decide on their own whether to permit or ban them.

Sen. Sam Brownback and Rep. Duncan Hunter called for the resignation of Sen. Larry Craig, the Idaho Republican who pleaded guilty to disorderly conduct in an airport men's room in an undercover police operation.

"It's important that the party stand for family values," said Brownback, although as recently as last week, he pointedly avoided recommending that Craig step down.

Brownback also drew boos from the audience when he called for passage of a constitutional amendment to ban gay marriage. "I understand there is a divided audience," he said.

Giuliani responded to questions about his personal life by saying he is human and faces problems that are not uncommon to many Americans.

"I am not running as a perfect candidate for president of the United States. I'm running as a human being who has been very successful as a leader," he said. "So obviously, any issues in my private life do not affect my public performance.

His daughter has indicated support for Democrat Barack Obama, and his son has said he did not speak to his father for some time. Giuliani and their mother, Donna Hanover, had a nasty and public divorce while Giuliani was New York's mayor, and he has since remarried.

The debate took place on a stage at the University of New Hampshire, roughly four months before the state holds the first primary of the 2008 race.

Thompson clearly hoped to upstage the event - scheduling an appearance on a late-night television show and airing the first television commercial of his campaign on Fox, whoich was airing the debate.

He was not disappointed. Brit Hume, the debate moderator, opened up by asking each of the eight candidates to respond to the newcomer.

"I was scheduled to be on Jay Leno tonight, but I gave up my spot to somebody else because I'd rather be here in New Hampshire," joked Huckabee, referring to the host of the show Thompson was to appear on.

"Why the hurry? Why not take some more time off?" Romney said humorously.