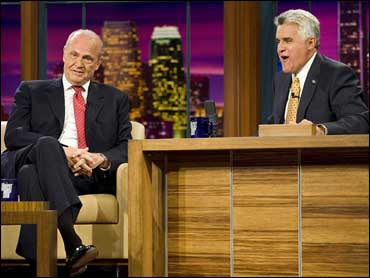 Thompson also is calling attention to his candidacy with a 30-second ad being broadcast during a Republican debate in New Hampshire that he is not participating in, and he will explain the rationale for his candidacy during a 15-minute Web cast on his Web site just after midnight.

"On the next president's watch, our country will make decisions that will affect our lives and our families far into the future. We can't allow ourselves to become a weaker, less prosperous and more divided nation," Thompson says in the ad that will air on Fox News Channel.

Thompson, 65, enters a crowded GOP field and an extraordinarily fluid race four months before the first votes are cast. While Rudy Giuliani leads in national polls, Mitt Romney maintains an edge in the early voting states of Iowa and New Hampshire. Overall, Republican voters have expressed less satisfaction with their choices than Democrats, which Thompson sees as an opening for his candidacy.

It won't be easy for the former Tennessee senator. His campaign has been beset by lackluster fundraising and multiple staff changes, the most recent coming on Tuesday with the departure of his spokesman of just two weeks, Jim Mills.

His made-for-television entry, and absence from the GOP debate, didn't go over well with some in New Hampshire.

"There is a genuine interest in Senator Thompson here, a real curiosity about him," New Hampshire Republican Chairman Fergus Cullen said Tuesday. "But that curiosity is giving way to skepticism and maybe even cynicism about him in part because of how he's handling his grand entrance. For him to then go on Jay Leno the same night and be trading jokes while other candidates are having a substantive discussion on issues is not going to be missed by New Hampshire voters."

Thompson starts some eight months after his eight rivals began their own campaigns, and he lags behind Giuliani and Romney in both money and organization. In June, Thompson fell short of his $5 million fundraising goal by $1.5 million.

Still, Thompson consistently ranks among the top Republicans in national polls and state surveys. A Southerner with a mostly right-leaning Senate record and a plainspoken style, he is looking to capitalize on discontent with the current choices among conservatives who make up a significant segment of GOP primary voters.

They have not yet settled on a candidate and are searching for someone with like-minded credentials who can win in a general election.

Thompson is perhaps best known to millions of Americans as the gruff district attorney Arthur Branch on NBC's crime drama "Law & Order," as well as for his roles in more than a dozen movies.

During his 1994-2002 Senate tenure, he was considered a reliably conservative vote. However, he did stray from the party line on a few issues, including advocating for campaign finance reform. He also was John McCain's campaign co-chairman in 2000 instead of backing establishment candidate George W. Bush.

Thompson spent many years in Washington as a lawyer and a lobbyist. He has faced repeated questions about his lobbying work for a family planning group seeking to relax an abortion rule and former leftist Haitian leader Jean Bertrand-Aristide.