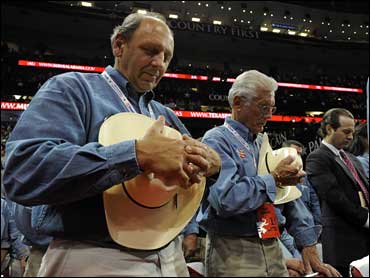 Delegates had scarcely settled into their seats when it was disclosed a lawyer had been hired to represent the Alaska governor in an investigation of her firing of the state's public safety commissioner. The other disclosure was personal, not political - the pregnancy of her 17-year-old unmarried daughter.

President Bush skipped his planned speech to go to disaster and relief centers, determined to avoid a repeat of the disaster mismanagement of Katrina.

McCain was in Waterville, Ohio, where he helped pack supplies to be sent to the Gulf.

Both men's wives sparked cheers when they appeared before the delegates, shunning politics to urge contributions to help storm victims.

Virtually the only political business of the convention's 2½-hour session was approval of a platform that sidestepped the Iraq War, one of the key issues in the campaign between McCain and Democrat Barack Obama.

"The waging of war - and the achieving of peace - should never be micromanaged in a party platform. ... In dealing with present conflicts or future crises, our next president must preserve all options," it said.

Outside the Xcel center was a reminder of the passions the war stirs.

An estimated 8,000 to 10,000 anti-war protesters marched toward the convention, some of them smashing windows, puncturing tires and throwing bottles along the way. Police used pepper spray on the demonstrators and made at least five arrests.

Melida Arredondo Alexander brought a coffin to the protest, as well as a photograph of her stepson, Corporal Alexander Arrredondo, who was killed in Iraq at age 20, reports CBSNews.com political reporter Brian Montopoli. She handed out copies of one of the letters Arrredondo sent from Iraq, which read in part, "I am not afraid of dying. I am more afraid of what will happen to all the ones that I love if something happens to me."

The convention was less than 15 minutes old when Mike Duncan, chairman of the Republican National Committee, asked delegates to use their cell phones to text a five-digit code that would make a donation to the Red Cross for victims of the hurricane.

It was a theme that first lady Laura Bush and Cindy McCain picked up more than an hour later.

"This is a time when we take off our Republican hats and put on our American hats," McCain said.

Added the first lady: "Our first priority for today and in the coming days is to ensure the safety and well-being of those living in the Gulf Coast region."

Behind the two women was a giant screen showing the names of state-approved charities in Alabama, Florida, Louisiana, Mississippi and Texas.

There was money news of a more conventional type, when John McCain's aides announced he had raised at least $47 million last month for the fall campaign against Democratic rival Barack Obama. It was the largest monthly amount to date for the GOP candidate.

While the opening day convention program was shorn of political rhetoric, aides said McCain was likely to deliver his nomination acceptance speech as scheduled on Thursday.

They added they would determine the podium schedule for the balance of the week on a day-to-day basis.

Some Republicans were eager for a more traditional convention week.

"When the storm passes and we can see that there are enough resources and that lives are not in danger any longer and help is on its way or in place, then that'll be the green light for us to enjoy the celebration we're all here for," said Kelly Burt, a delegate from California.

But what there was revolved around Palin, little know nationally until McCain named her his running mate last Friday.

An attorney has been hired to represent Palin in the legislature's investigation into the dismissal of public safety commissioner Walt Monegan, who was dismissed after he refused to fire a state trooper who had divorced the governor's sister.

"We have been hired to represent the Governor and the Governor's Office" in the investigation, wrote Anchorage attorney Thomas V. Van Flein.

"We fully welcome a fair inquiry into these allegations. ... Please know that we intend to cooperate with this investigation," the lawyer said.

"Bristol and the young man she will marry are going to realize very quickly the difficulties of raising a child, which is why they will have the love and support of our entire family," Sarah and Todd Palin said in the brief statement.

The father was identified in the statement as Levi, but the campaign said it was not disclosing his full name or age or how he and Bristol know each other, citing privacy.

Aides said Palin had informed McCain about her daughter's pregnancy before she was picked to be his running mate. At several points during the discussions, McCain's team warned the governor that the scrutiny of her private life would be intense and that there was nothing she could do to prepare for it.

"Senator McCain's view is this is a private family matter. As parents, (the Palins) love their daughter unconditionally and are going to support their daughter," said McCain spokesman Steve Schmidt.

Prominent religious conservatives, many of them long cool to McCain's candidacy, issued statements of support.

James Dobson, founder of Focus on the Family, commended the Palins for "for not just talking about their pro-life and pro-family values, but living them out even in the midst of trying circumstances."