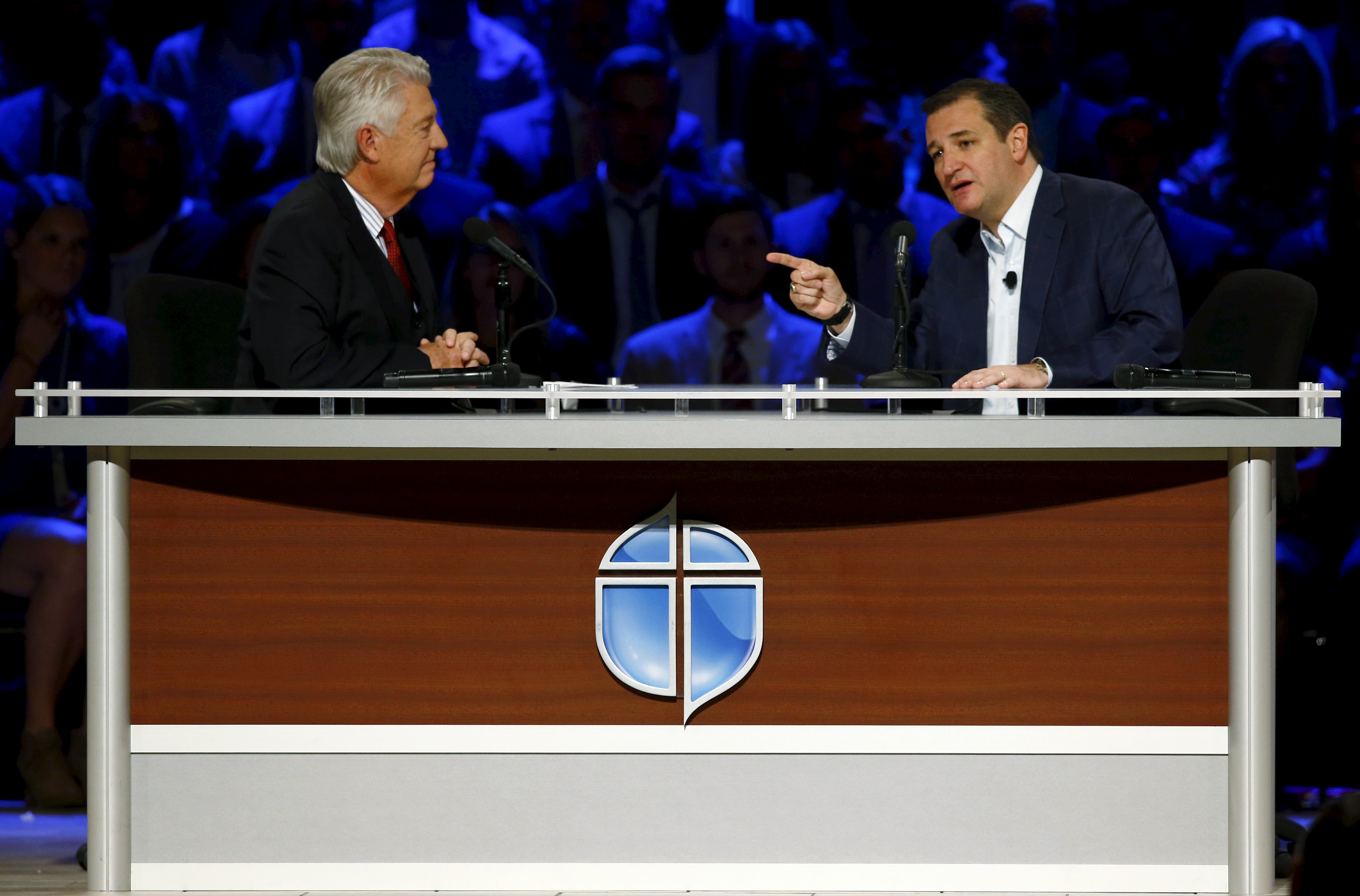 PLANO, Texas -- A half-dozen Republican presidential hopefuls worked to woo thousands of evangelicals at a Texas megachurch in suburban Dallas on Sunday, declaring their unwavering support for "religious liberty" even after the Supreme Court legalized same-sex marriage and their defense of life in abortion cases and beyond.

But the four-plus hour event before what organizers said was a crowd of 7,000 at the Prestonwood Baptist Church in Plano underscored the importance of the religious right, as well as the potentially pivotal role Texas' earlier-than-usual primary could play in the 2016 race.

"I'm trying to separate church and politics, but Hillary Clinton said people of faith, 'Just have to get over it,'" Bush said. "That's just wrong."

"Everyone was invited to come but we believe the right people are in the room today," said pastor Jack Graham, who interviewed all the candidates about the importance of faith in their lives. He identified those gathered as evangelicals whom he called "Christians who believe the Bible." Santorum subsequently declared himself an "evangelical Catholic."

Responding to questions about his church's non-profit status perhaps being violated because the event was political, Graham said that Democratic presidential hopefuls were also invited - but didn't appear.

Carson declared, "It's time for us to bring God back to our country," bringing the crowd to its feet despite his self-admitted "calm demeanor that people mistake as softness."

"It's not softness; it's just the ability to look at things from multiple perspectives without getting angry about it," Carson clarified, saying God gave him the ability to do so.

Cruz said faith in America "was under assault," prompting some in the sprawling, stadium-style sanctuary to bellow "Yes!" He pointed to the Supreme Court ruling on gay marriage, and to businesses that he said had faced boycotts because they opposed same-sex weddings on religious grounds.

"I believe that 2016 is going to be a religious-liberty election," Cruz said to raucous applause. "As these threats grow darker and darker and darker, they are waking people up here in Texas and all across this country."

Fiorina was more subdued, saying her faith was once "a little abstract" since "I came to think of God as a CEO of a big enterprise. He was in charge, but he couldn't possibly know every little detail."

But, she told the faithful, she later discovered that "each one of us can have a personal relationship with Jesus Christ."

"God knows what's going on in our lives," she said, "and that personal relationship saw me through many hard times."

All candidates decried abortion. But Bush highlighted what he called his record of "defense of life" while governor, reminding the crowd that he intervened in the case of Terri Schiavo, a brain-damaged Florida woman at the center of a protracted court fight over having her feeding tube removed.

Grassroots groups in tea party-dominated Texas largely have shunned Bush in favor of insurgent candidates like Cruz or Trump, but Bush has courted Christian conservatives at many events around the country organized by the Faith and Freedom Coalition, which also helped put together Sunday's gathering.

Bush spoke last and some streamed for the exits as he took the stage - after sitting through hours of candidates and intermissions featuring gospel music and a choir rendition of "America the Beautiful."

The Plano forum also offered presidential hopefuls a chance to make inroads in Texas, the country's largest conservative state. Officials moved the presidential primary up from May to March 1, and Texas is now set to be the largest of 13 states voting on "Super Tuesday."

Bush was born in the oil-patch town of Midland, his brother George W. was Texas governor before he was president and his father, George H.W., lives in Houston. Graham declared, "Welcome to Bush country."

Bush smiled and replied, "Is that named after my brother or my dad?"