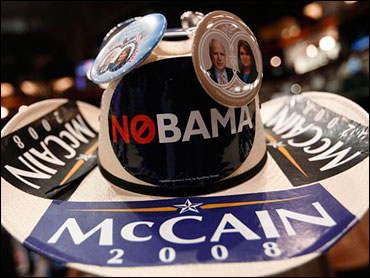 The Republican Party hopes to get back to the business of getting John McCain elected president in the remaining sessions of its national convention, CBS News reports.

The GOP scaled down a normally boisterous opening day out of deference to Americans caught in Hurricane Gustav while struggling to put out fires that sprang up around his little-known female vice presidential pick.

Just hours before the Republican political festival opened in the Minnesota capital, Alaska Gov. Sarah Palin disclosed that her unmarried 17-year-old daughter is pregnant. It also was revealed Monday that an attorney had been hired to represent Palin in a state ethics probe and that her husband, Todd, had been arrested for drunken driving two decades ago.

McCain senior adviser Nicolle Wallace told CBS' The Early Show Tuesday that the candidate knew about the pregnancy and within the campaign "this did not give anyone any pause."

The man who led McCain's vice presidential search team said he thought everything that had come up as a possible red flag during the background check had now been made public.

"I think so," Arthur B. Culvahouse Jr. told The Associated Press. "Yes. I think so. Correct."

Hurricane Gustav, which pounded ashore 1,000 miles to the south, provided some distraction from the news surrounding Palin. Yet initial reports showed the storm was not as devastating as feared, and attention quickly returned to the 44-year-old mother of five, known as a maverick who has routinely challenged the Alaska state political machinery.

Gustav, while reminding Americans of how the administration of President George W. Bush bungled the response to Hurricane Katrina three years ago, gave McCain's Republicans a chance to show they could do better this time as they pushed hard to strengthen the relief effort.

Convention organizers stripped out pageantry normally attached to the opening day of a political convention, and Republicans scaled back attacks on Democratic candidate Barack Obama.

Instead, first lady Laura Bush and her would-be successor, Cindy McCain, provided the day's star power, appealing for delegates to open their wallets to help those caught in Gustav's path.

"This is a time when we take off our Republican hats and put on our American hats," said Cindy McCain, reprising a line her husband used Sunday.

The plan for Tuesday is a revamped lineup, highlighted by scheduled speeches from former Tennessee Senator and presidential nominee Fred Thompson and Sen. Joe Lieberman, I-Conn., who was on McCain's short list for vice president, CBS News reports.

On Monday, Mr. Bush and his vice president, Dick Cheney, canceled their appearances even before Republican convention organizers decided to scale back the first day's events. Mr. Bush headed to Texas to be nearer hurricane relief efforts.

McCain visited a relief center in Ohio and helped pack cleaning supplies and other items into plastic buckets to be sent to storm-hit states along the Gulf of Mexico.

The hurricane hit the heart of Louisiana's oil and fishing industries but appeared to spare New Orleans the catastrophic flooding of Katrina.

Democratic nominee Obama also scaled back his political activities and turned his attention to the Gulf Coast. After stops in Michigan and Wisconsin, he was returning to his Chicago headquarters to monitor the storm's progress and decide his schedule for the rest of the week. He urged supporters to donate to the American Red Cross.

As Republicans assembled, outside the Xcel Center protesters smashed windows, punctured car tires and threw bottles, and there were reports that delegates from Connecticut were attacked as they stepped off their bus to attend the day's convention session.

An estimated 8,000 to 10,000 anti-war protesters marched toward the convention, some of them smashing windows, puncturing tires and throwing bottles along the way. Police used pepper spray on the demonstrators and made at least five arrests.

Melida Arredondo Alexander brought a coffin to the protest, as well as a photograph of her stepson, Corporal Alexander Arrredondo, who was killed in Iraq at age 20, reports CBSNews.com political reporter Brian Montopoli. She handed out copies of one of the letters Arrredondo sent from Iraq, which read in part, "I am not afraid of dying. I am more afraid of what will happen to all the ones that I love if something happens to me."

The war was likely to get a second day of attention outside the convention on Tuesday as U.S. Rep. Ron Paul, a former Republican presidential candidate who opposes the Iraq war, was expected to speak to supporters at a Minneapolis rally. Separately, a group advocating for the poor was planning a protest march toward the convention center.

The hurricane marked a pause in what has been the most compelling U.S. presidential campaign in memory. Both McCain and Obama were given little chance at the outset of their parties' primary campaign of winning the nominations.

McCain added further spice to the race last week by naming a Palin, a virtual unknown, as his running mate - the first Republican woman ever picked as a vice presidential candidate. Palin is a strong opponent of abortion and her selection was seen as boosting McCain's support among the party's base of Christian conservatives, many of whom have been reluctant to back him.

For a second day Tuesday, Palin had no public events scheduled. Her only public comments Monday came in a brief statement with her husband, Todd, about their daughter's pregnancy and decision to marry the father, who was identified only as Levi.

McCain's campaign aides said the statement was issued to rebut Internet rumors that the governor's 4-month-old baby was, in fact, Bristol's.

"Bristol and the young man she will marry are going to realize very quickly the difficulties of raising a child, which is why they will have the love and support of our entire family," the Palins said in the brief statement.

In Monroe, Michigan, Obama condemned rumors involving the children of candidates and echoed the McCain campaign argument. Said Obama: "I think people's families are off limits, and people's children are especially off limits."

James Dobson, founder of Focus on the Family, commended the Palins for "for not just talking about their pro-life and pro-family values, but living them out even in the midst of trying circumstances."

The decision to hire a lawyer for Palin stems from an investigation into whether the governor fired Alaska public safety commissioner Walt Monegan after he refused to fire a state trooper who had divorced Palin's sister.

In July, a legislative oversight committee approved $100,000 to investigate whether Palin abused her power.

The dispute over the dismissal has dogged Palin for nearly two months and is likely to do so for another two months leading to the Nov. 4 election.

The legislature's investigating committee disclosed the attorney's hiring on Monday. The committee released an e-mailed letter it had received from the lawyer on Friday, the day McCain announced Palin would be McCain's running mate.

Tucker Eskew, a senior McCain adviser, said the state, not Palin herself, hired the attorney to represent her in her capacity as governor, and he has been working for several weeks.

"The governor of every state gets legal counsel, and this attorney is part of a weeks-old effort to provide this governor defense in a series of outlandish politically motivated charges," Eskew said.