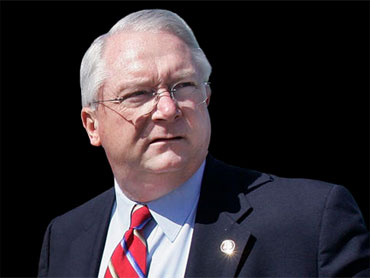 Rep. Randy Neugebauer (R-TX) has admitted that he is the person who yelled "baby killer" as Rep. Bart Stupak was speaking about the health care bill yesterday. He said he was not referring directly to Stupak but rather to the bill itself.

"Last night was the climax of weeks and months of debate on a health care bill that my constituents fear and do not support," Neugebauer said in a statement. "In the heat and emotion of the debate, I exclaimed the phrase 'it's a baby killer' in reference to the agreement reached by the Democratic leadership. While I remain heartbroken over the passage of this bill and the tragic consequences it will have for the unborn, I deeply regret that my actions were mistakenly interpreted as a direct reference to Congressman Stupak himself."

"I have apologized to Mr. Stupak and also apologize to my colleagues for the manner in which I expressed my disappointment about the bill," continued the lawmaker. "The House Chamber is a place of decorum and respect. The timing and tone of my comment last night was inappropriate."

Stupak released a statement following Neugebauer's statement saying he "did receive an apology call from Congressman Neugebauer this afternoon. I accepted his apology. I also let him know that, while we all have had a very long week and tensions were high leading up to the vote Sunday night, I feel it is important for Members to maintain decorum of the House."

"Over the past year there have been a couple of incidents on the House floor where outbursts have tarnished Congress's reputation and I hope there are no further incidents," Stupak added.

On Sunday afternoon, Stupak, a fierce opponent of abortion rights, held a press conference announcing that despite his previous misgivings, he would support the Senate version of health care legislation.

Watch CBS News Videos Online
But Stupak agreed to back the bill Sunday because President Obama said he would issue an executive order affirming his commitment to existing bans on taxpayer funding for abortion. "We've been able to come up with an agreement to respect the sanctity of life on health care reform," Stupak said at a press conference.

While it was never entirely clear how many lawmakers Stupak brought with him, he was seen as the leader of a block of six or more like-minded Democrats, many of whom appeared at the press conference with him to announce they too would vote yes. With the health care bill passing by a slim margin, his decision may well have been the decisive one in the passage of the bill.

On Sunday night the House passed the Senate bill, nearly guaranteeing that the president would be able to sign a reform bill into law. Republicans had put forth a (futile) motion to try to kill the legislation predicated in large part on the abortion issue, and Stupak stepped forward to speak; during his remarks, as you can see above, someone, reportedly on the Republican side of the aisle, yelled the words "baby killer" in his direction.

Reporters immediately began trying to figure out who, exactly, was responsible for the remark. But in a rare display of bipartisanship, both Democratic and Republican lawmakers kept their mouths shut. Rep. John Campbell (R-Calif.) was originally identified as the shouter, but he told Politico that while it was definitely someone on the House floor, it wasn't him. He suggested it was one of the House Republicans from Texas, but did not name names. "Some people know who it is but won't say," said Campbell. (Texas Rep. Joe Barton suggested he knew the identity of the shouter but would not be identifying him.)

Democratic Rep. David Obey of Wisconsin, meanwhile, told reporters he knew who had made the comment. But he declined to identify him. "Members have a right to make an idiot of themselves once without being exposed," he said, according to the Huffington Post.