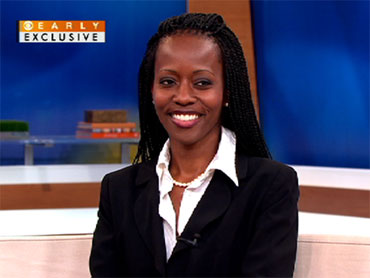 Carla Franklin, who believed she was cyberstalked, is claiming victory in a case involving harassment when defamatory comments about her were posted online.

A judge has ruled that Google must release the names of the online tormentors who made the crude comments about Franklin, a 34-year-old businesswoman.

When an anonymous cyberbully posted unauthorized videos of her on YouTube, complete with offensive comments like the word "whore," Franklin took action.

She was able to get the video and comments removed by Google, which owns YouTube, but Franklin wanted more. So she sued Google to try to get it reveal the identity of her online offenders.

She spoke about her legal battle on "The Early Show" last August.

She said then, "I don't care about being called names. It was a safety issue."

A judge ruled in her favor and now -- under court order -- Google has 15 days to release the names, addresses and phone numbers of three screen name tormentors: JOEBOOMO8, JIMMYJEANOO8, and GREYSPECTOR09.

But such information may still not unveil those who assaulted Franklin's character.

Joseph DeMarco, an attorney specializing in Internet issues, told CBS News, "Even if you know there is an Internet Protocol address associated with some wrongdoing, finding out who that person is can be a very, very difficult challenge."

Free e-mail accounts and public computers also enable people to hide in the shadows of the Web. Experts say that continues to present legal hurdles in cases involving cyberbullies - like the ones encountered by Carla Franklin.

DeMarco said, "The advent of new technology that allows for privacy to be intruded upon has raised the stakes dramatically in the debate over privacy and the law."

She said, "I'm just so happy they got my court order. When I started this journey, I had, first of all, no idea that the media would be interested in it. It was a private matter that, you know, needed to be resolved. What was happening to me was unacceptable. There was an Internet shrine created to me on YouTube dedicated to Carla Franklin containing information that could be used to trace me to my job or my home. And then, someone, who I believe is the same person, created, you know, another YouTube account to call me a "whore." And I feel good I've at least gotten the court order. I thought that would be the hardest part, and now that's done and I'm extremely happy."

Hill said, "You told me earlier this summer when we spoke ... on the phone, you were a little reluctant, not sure you wanted to come on television, but even then you said to me, 'I think I know who this person is.' You are this close now. Are you confident the person you think it will be will be?"

Franklin responded, "I'm pretty confident. Who knows? It could be someone else, but I will say this is targeted harassment and, you know, over the past couple of weeks, I guess all of this attention has settled in. And, you know, over the past year, I've kind of become a cyber-harassment expert and have been able to help people over the past few weeks who've also suffered from targeted bullying. And so ... Google has been, you know, great, you know, they've been communicative. They are helping me in my case and my case is an example and inspiration to others facing this issue, also."

"I am working with New York (State) Sen. Eric Adams, an amazing man, a former police officer, (who) reached out to me when he heard about my case. As I said before, had this happened through the mail or the phone or in person, this would absolutely be illegal. I could have gone to the police. You can't go to the police when it's online. Sen. Adams has me doing research. He's recently had a cyber-business roundtable, where many companies, including Google and Yahoo!, attended, and it was an amazing, very productive roundtable."

So what if you are a victim of cyberbullying? Should you, too, go to the courts?

Franklin said, "I think that is one route. I would say, you know, for parents, for people out there who are concerned, there are limited tools out there, set up Google alerts on yourself. Periodically search yourself. If you are a parent, figure out what your kid is doing online. You know, unfortunately, we as the adults are setting the example for kids. That is why there is an increase in cyberbullying. I do want to say that. We are part of the problem. But, I would recommend taking that route to monitor yourself. If it gets worse, absolutely, call your senator, go to the court. Stand up for yourself. Do not be afraid. I was afraid initially. I'm not anymore. I'm empowered."

Franklin is involved with a new advocacy group that will be providing many free self-help tools, tips, and resources for victims of cyber predators, cyber stalkers, and Internet defamation victims on a new website, FreeSpeechV3.org.