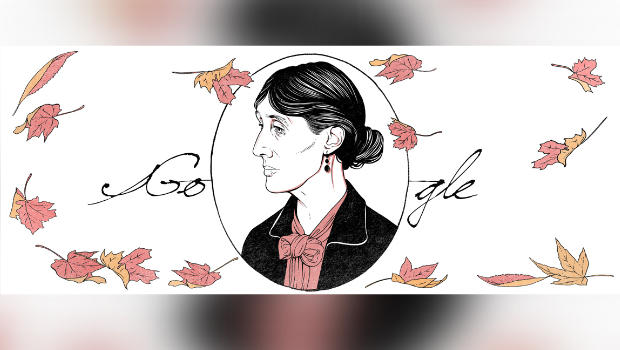 Virginia Woolf was a pioneer in the use of the stream-of-conscious narrative approach, harnessing a poetic vision that elevated sometimes mundane settings while examining the complex interior lives of her characters.

To celebrate one of the 20th century's foremost novelists, Google dedicated its Doodle on Thursday to Woolf on the 136th anniversary of her birth.

Born in London in 1882, Woolf was homeschooled in the English classics and Victorian literature for much of her childhood. She began writing professionally in 1900, becoming a significant member of London's literary society and the Bloomsbury Group, a collective of prominent contemporary intellectuals and artists.

While Woolf grew up surrounded by the London literary scene, it was her childhood memories of visiting the Cornish coast that inspired the settings of the English author's most powerful narratives, including "To the Lighthouse" (1927).

Employing the stream of conscious approach, Woolf described in a 1921 diary entry how memories of family holidays and the surrounding landscape, especially the Godrevy Lighthouse, impacted her fiction in later years.

"Why am I so incredibly and incurably romantic about Cornwall? One's past, I suppose; I see children running in the garden ... The sound of the sea at night ... almost forty years of life, all built on that, permeated by that: so much I could never explain."

Her literary reputation declined after World War II, but her works attracted renewed focus thanks to the 1970s feminist criticism movement. Woolf's best known nonfiction works, "A Room of One's Own" (1929) and "Three Guineas" (1938), examine the challenges female writers and intellectuals faced due to the disproportionate legal and economic power held by men.

Woolf also suffered from mental illness for much of her life, and she took her own life by drowning in 1941 at the age of 59.