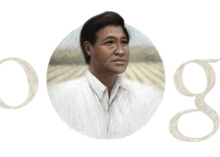 Google stirred up some Internet users when it chose to honor labor leader and civil rights activist Cesar Chavez on its homepage on Easter Sunday. The search giant occasionally chooses to commemorate holidays or popular public figures with a doodle.

Google honored Chavez's birthday, which is on March 31. The date was recently named Cesar Chavez Day by President Obama.

Some conservative celebrities and other Twitter users went online to express their anger that the search giant didn't acknowledge the Christian holiday celebrating the resurrection of Jesus Christ.

While Fox News contributor Dana Perino tweeted, "I thought the Chavez-google thing was a hoax or an early April Fool's Day prank...are they just going to leave that up there all day?"

Several people threatened to switch from Google to Bing out of anger, while others may have thought Cesar Chavez was the late Venezuelan president Hugo Chavez.

Business Insider points out that Google hasn't had an Easter doodle since 2010. The search giant released this statement to the news site:

"We enjoy celebrating holidays at Google but, as you may imagine, it's difficult for us to choose which events to highlight on our site. Sometimes for a given date we feature an historical event or influential figure that we haven't in the past."