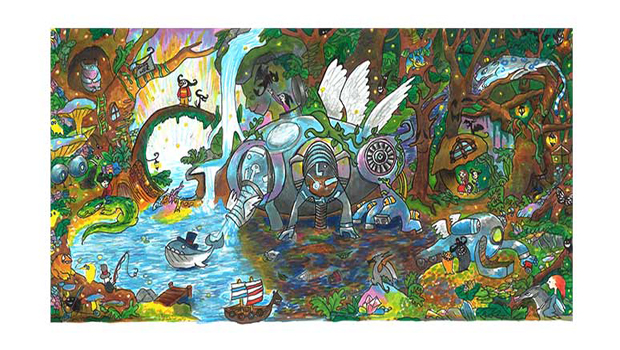 Before many of the world's greatest inventions were realized, they were doodled. That was the premise for this year's Doodle 4 Google, a national art contest in which the winner's drawing gets displayed on the search engine's homepage.

Students across the country were asked to redesign the Google logo to reflect the theme, "If I could invent one thing to make the world a better place." Out of more than 100,000 submissions, 250 state finalists, 50 state winners and five national age group winners, 11-year-old Audrey Zhang of New York won.

Featured on Monday's Google homepage, Zhang's drawing -- titled "Back to Mother Nature" -- is of a "transformative water purifier" that takes in polluted water and converts it into clean water that is safe for both humans and animals.

"I was thinking that if we didn't have water we couldn't live," Zhang told CBS New York in April.

Not her first time in the competition, Zhang was a state winner and national finalist in the 2013 Doodle 4 Google.

Zhang also got the chance to work with Google animators to bring her drawing to life.

"As an animator and director for a day, she made sure we twinkled each light and cleaned the water just right and took extra care for the illustration's dragons--about whom she is also writing a novel," writes Product Marketing Manager, Liat Ben-Rafael, in a blog post.

As winner, Zhang received a $30,000 college scholarship and a $50,000 Google for Education technology grant for her school. Google says it was so inspired by the middle schooler's doodle that it donated $20,000 towards providing clean water to schools in Bangladesh.