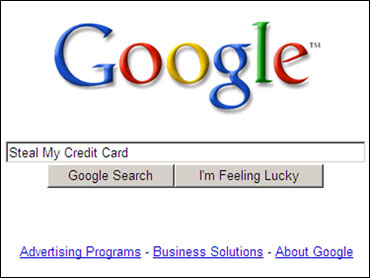 SAN JOSE, Calif. (CBS) A California family was shocked to find that a Russian website had posted their private financial information on the Internet and it was available to anyone with a simple Google search.

In San Jose, Jacques Robinson's daughter typed her parents' names into Google and discovered a spreadsheet posted on a Russian website that had their credit card number, its expiration date and security code, according to CBS 5 San Jose.

The site also had a home address and mother's name, information which can be used to take control of bank accounts and steal money. And according to Robinson, who happens to be a technology expert, they were just one of many victims.

"It appears that people are stealing credit card information and then using it to start loan accounts at online banks and then drawing down on those loans and then sticking the credit card owners with the bill," he said.

Cases like this one are not uncommon, say experts. Chris Hollfnagle, director of UC Berkeley Center for Law and Technology's Information Privacy Programs, told CBS 5 that websites with lists of financial records are a gateway for criminals to collect and sell individuals' credit card numbers.

"This is a document you would sell," Hoofnagle told the station after reviewing the Russian spreadsheet. "The main point of this would be to resell it to someone who would actually charge these numbers."

A spokesperson for Google told CBS 5 that the company's search engine only locates other sites already on the internet, and although Google could remove the searchable item on its site, the only way to permanently eliminate the web page is to contact the webmaster of the aberrant site.

That could be tricky, since the website is entirely in Russian.

For now, the family has contacted its credit card company, and CBS 5's investigative team, to probe what might be lurking in this corner of the world-wide-web.