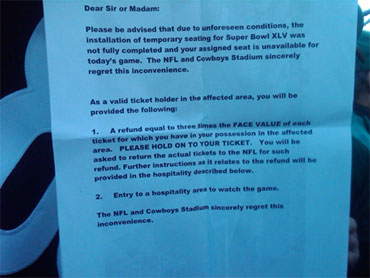 DALLAS - The NFL knew last week there were problems with the installation of temporary Super Bowl seating sections and hoped until hours before kickoff that they could be fixed.

Four hundred people were forced to give up their seats for the Green Bay Packers' 31-25 victory over the Pittsburgh Steelers on Sunday night, and instead had to watch the game on monitors or use standing-room platforms in corners of Cowboys Stadium.

Another 850 fans were moved from their seats in the temporary sections to other seats.

"It was obviously a failure on our behalf, and we have to take responsibility for that," NFL Commissioner Roger Goodell said. "We had, obviously, a lot of challenges this week. There were a lot of things we were trying to deal with. But there's no excuses. When you put on an event like this, you know you're going to have those sorts of challenges."

He said the league would give tickets for next year's Super Bowl to the 400 fans left without a place to sit Sunday. The league already had said it would offer those 400 people refunds of triple the face value of their Steelers-Packers tickets.

Grubman said there "was no vertical structural issue that we were aware of from the police department," but that issues arose with the "final installation of railings, of tightening risers, steps, things of that nature — and that's what did not get completed at the end."

The league, Grubman said, "felt in the middle of the week that it was going to be a problem. We did not feel until the game day that we had an issue where ... there was a distinct possibility that we wouldn't be able to accommodate fans."

He said final work on the temporary sections was done Sunday afternoon.

In the coming weeks, the NFL will review what happened to figure out what went wrong.

Asked whether Cowboys owner Jerry Jones or local organizers were at fault for the seating issues, Goodell said: "No. We put on this event. This is the responsibility of the NFL."

There was other bad news for the first Super Bowl in the Dallas area.

A rare winter storm swept across the area Tuesday, ripping holes in tents on stadium property and hampering travel and celebrations across the region. On Friday, six people at the stadium were injured by melting snow falling from the stadium roof.

"I don't think the weather had any significant contribution to the seating issue," Grubman said.

Goodell said local organizers "did an outstanding job. It was a great event. And I'm sure that they'll be seeking another Super Bowl, and I'm sure the ownership will look at that very seriously."