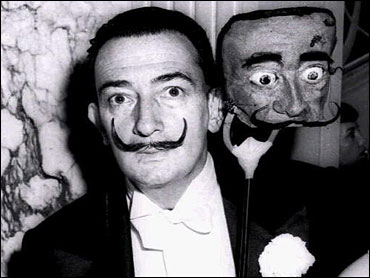 Prison guards may have conducted a middle-of-the-night fire drill to provide cover for the theft of a valuable Salvador Dail sketch from a New York City jail, the New York Daily News reported.

The sketch of the crucifixion was taken from a locked display case that faces a booth that is manned 24 hours a day. The sketch was kept in an area of the prison off limits to prisoners. A copy was left in its place.

Investigators are questioning a number of guards and commanders, including an assistant warden who was on duty during the fire drill the night the work by the surrealist artist was stolen.

Jail employees first noticed that the large charcoal and watercolor sketch of Jesus was missing several hours after the fire drill, ordered in the middle of the night early last Saturday.

The theft is being investigated by the city Department of Investigation, the police department and the Bronx district attorney's office.

Dali drew the untitled sketch as a favor to Correction chief Anna Moscowitz Kross 38 years ago. It was displayed in the jail's dining room for 16 years before being moved to the lobby, where only officers and visitors are allowed.