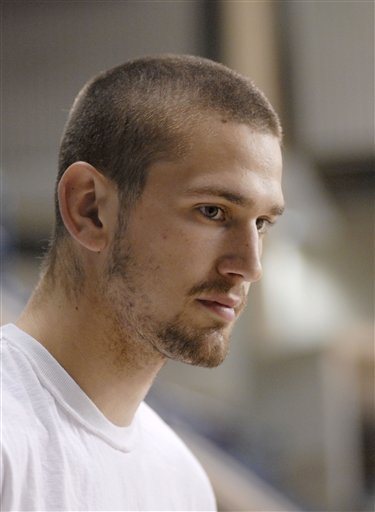 Suspended Gonzaga center Josh Heytvelt was charged Tuesday with felony possession of a controlled substance, stemming from a recent arrest when police said they found hallucinogenic mushrooms in his car.

Heytvelt, 20, and teammate Theo Davis, 21, were arrested in Cheney on Feb. 9 and booked into Spokane County Jail. They were released the next day on their own recognizance.

According to court documents released Tuesday, police found 33.2 grams _ just over an ounce _ of mushrooms inside a plastic ziplock bag in the back of the Chevrolet Blazer that Heytvelt was driving. Possession of any amount of illegal mushrooms is a Class C felony.

Davis, a freshman who has not played because of injuries, will be referred to Cheney Municipal Court. It will be up to the prosecutor there to determine whether he will be charged with misdemeanor marijuana possession, Assistant Spokane County Prosecutor John Grasso said.

A summary of facts filed with the Heytvelt charge in Spokane County Superior Court includes an officer's report that Heytvelt denied the mushrooms _ and three chocolate muffins containing mushroom pieces _ were his. Both Heytvelt and Davis denied knowing the hallucinogens were in the car.

Tests at the Washington State Patrol Crime Lab in Cheney indicated the presence of psilocyn, or psilocybin, both of which are controlled substances, the court documents indicate.

If convicted, Heytvelt faces a maximum prison sentence of five years and a $10,000 fine. But Grasso said a typical sentence for a first-time drug offender is six months or fewer, and the sophomore could be given a lesser sentence if he agrees to a structured diversion program.

A summons will be sent to Heytvelt and his attorney to appear at an as-yet unscheduled arraignment on the charge within two weeks, Grasso said.

Heytvelt, a 6-foot-11 sophomore center-forward, was the team's second leading scorer, averaging 15.5 points. He was the leading rebounder, with 7.7 per game.

After their arrests, coach Mark Few placed the players on indefinite suspension for breaking team rules. Heytvelt has not played in the four games since his arrest.

Final disciplinary action by the university would wait until the legal process has run its course, Goodwin said.

Dennis Thompson, a Spokane lawyer who represents the pair, was not in his office Tuesday morning and was unavailable for comment, a secretary said.