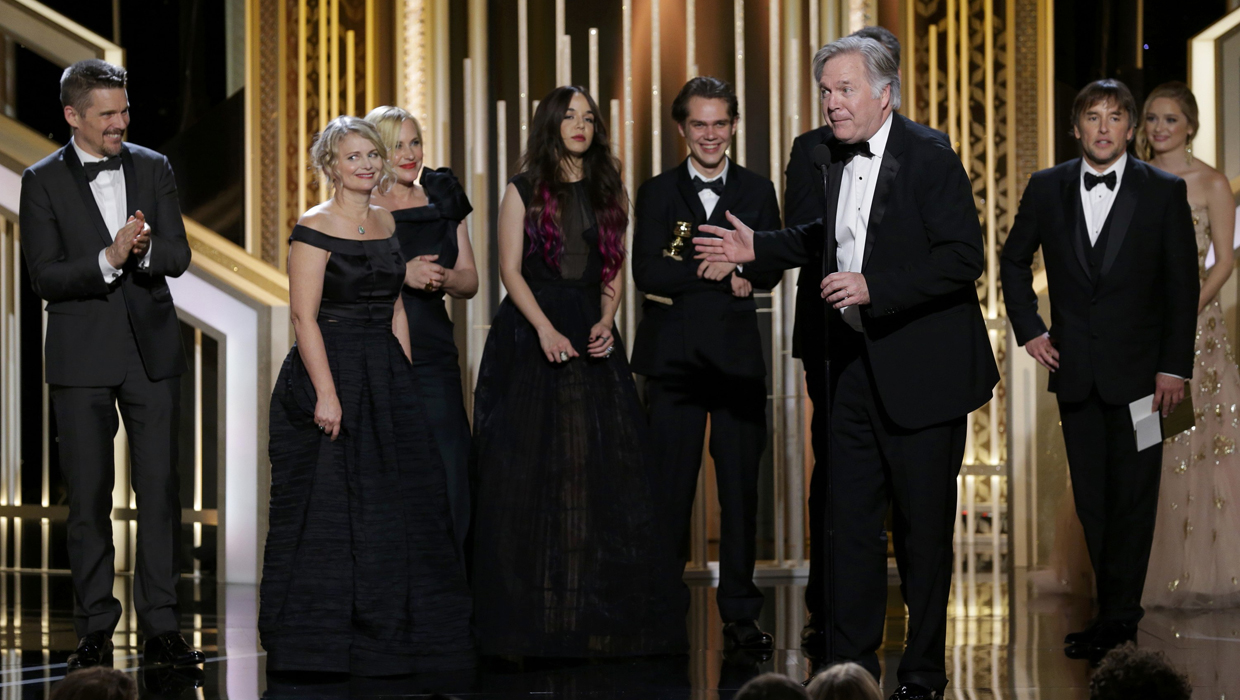 "Bottom line is we're all flawed in this world. No one's perfect," said Linklater. "I want to dedicate this to parents that are evolving everywhere and families that are just passing through this world and doing their best."

Arquette got emotional while talking about her late parents and thanking her children, saying, "My favorite role in my whole life has been being your mom."

The night seemed to be setting up for the top two Oscar contenders -- "Boyhood" and Alejandro Gonzalez Inarritu's backstage romp "Birdman" -- to lead the Globes' twin categories of drama and comedy. But in a major surprise, Wes Anderson's "The Grand Budapest Hotel" swooped in to win best picture, comedy or musical. He listed a mock thank you to the members of the Hollywood Foreign Press, the collection of mostly freelance foreign journalists who put on the Globes, naming "Yorum and Dagmar and Yukiko and Mounawar."

"Birdman" nevertheless won best actor in a comedy or musical for its lead, Michael Keaton, who plays a former superhero star mounting a serious play on Broadway, and best screenplay.

Reflecting on his life, Keaton's voice broke up as he thanked his son, whom he called his best friend. "Shoot," he said. "Two things I swore I wasn't going to do: cry and give air quotes."

Eddie Redmayne won the Golden Globe for best actor in a motion picture, drama, for portraying Stephen Hawking in "The Theory of Everything," while Julianne Moore took the best dramatic actress prize for playing a professor diagnosed with early-onset Alzheimer's in "Still Alice."

Hosts Tina Fey and Amy Poehler kicked off the show by skewering Hollywood's most tender subjects: the hacking of Sony Pictures over "The Interview," the sexual assault allegations against Bill Cosby and television's rise as a cultural rival to movies.

The duo, in their third consecutive year as hosts, opened the show by welcoming "despicable, spoiled, minimally talented brats" to the show, celebrating "all the movies that North Korea was OK with."

Fey and Poehler also made sure to relish their favorite target: George Clooney. Of the night's Cecil B. DeMille honoree, Fey suggested the lifetime achievement award might have been better off going to his new wife, human rights lawyer Amal Clooney, who spent 2014 working for the United Nations.

The recent terrorist attack in Paris at the offices of the satirical newspaper Charlie Hebdo hung heavily over the show, televised live from the Beverly Hill Hilton in Beverly Hills, California. Attendees such as Clooney sported "Je Suis Charlie" pins and others like Helen Mirren held up signs that read the same on the red carpet.

The first award of the night went to J.K. Simmons for best supporting actor for his performance as a domineering jazz teacher in the acclaimed indie "Whiplash." He thanked his young and confident co-star, Miles Teller, who "inspired me every day to want to scream at him and hit him in the face."

Some winners were caught by surprise. Accepting the award for best actress in a comedy or musical for her performance in "Big Eyes," an unprepared Amy Adams said: "I didn't even reapply lip gloss."

The night had an orchestrated but carefree spirit, filled with the usual high dose of red carpet glamour, celebrity cameos (Prince!) and even the drink-swilling return of an old Globes scoundrel, Ricky Gervais.

The DreamWorks sequel "How to Train Your Dragon 2" took best animated film over the favorite, "The Lego Movie." The Stephen Hawking biopic "The Theory of Everything" won best score for Johann Johannsson, and the Russian entry "Leviathan" took best foreign language film.

"You can say anything in the world and get in trouble. I know this for a fact," said Thornton. "So I'm just going to say thank you."

Amazon, crashing the party like Netflix did before it, celebrated its first Golden Globe for the sexual identity comedy "Transparent," winning best TV series, musical or comedy. The show's star, Jeffery Tambor, also landed best actor in the category, dedicating his award to the transgender community.

Showtime's newcomer "The Affair," which explores the ripple effects of an extramarital affair between a married novelist and a waitress, won for best TV drama series and lead actress Ruth Wilson.

First-time nominee Gina Rodriguez was named best actress in a TV series, comedy or musical, for "Jane the Virgin," and Joanne Froggatt, winner of best supporting actress for "Downton Abbey," thanked survivors of rape who reached out to her after her character's storyline on the show.

Led by Fey and Poehler, the Globes have been on a terrific upswing in recent years. Last year's awards drew 20.9 million viewers, the most since 2004. Accepting the Globe for best original song for "Glory" in the civil rights drama "Selma," the rapper Common raised the status of the group behind the Globes even higher: "I want to thank God and the Hollywood Foreign Press."

The Hollywood Foreign Press, a group of mostly freelance journalists, has lately cleaned up its reputation for idiosyncratic choices and awards swayed by celebrity. Last year, the HFPA chose the eventual Academy Awards best-picture winner, "12 Years a Slave," as best drama and "American Hustle" as best comedy.