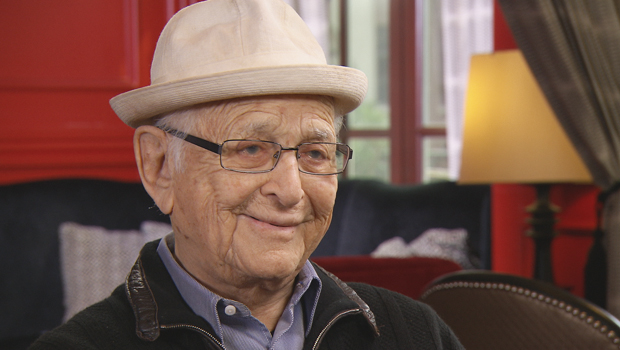 We have questions this morning for Norman Lear, the veteran TV producer who appears to have no thoughts of retiring. He's talking with our Mo Rocca:

Rocca asked, "Do you prefer [the term] senior citizens, the elderly, or old people?"

"I prefer 'older,'" Lear replied. "Yeah. Elderly has a connotation. I am clearly older than a lot of people, but am I old? Not yet!"

Which is why last November, during the Austin Film Festival, the King of Television, 93-year-old Norman Lear, was at it again. He brought together a group of actors for a reading of his newest television comedy: "Guess Who Died?" set in a senior living community, is about his contemporaries.

Robert Walden: "Morning, Patricia. How ya' doin'?"
June Squibb: "Terrific. Can't sleep without Xanax. Can't get out of bed without Celebrex. Can't eat without Prilosec. Other than that, I'm terrific."

Lear noticed that older characters were relegated to marginal roles on TV -- eccentric neighbors or wise-cracking grandparents. "Where are people my age?" he said. "There were no shows about us, about our lives, about our attitudes, about our problems."


You'd think that Lear would have no problem getting his script produced. After all, this is the man who gave us landmark comedies like "Maude," "Good Times," and "All In the Family."

But since writing his script for "Guess Who Died?" five years ago, a total of zero network executives has shown interest.

Finding the funny in the serious began early for Lear, when he was growing up working class in Connecticut. When he was nine years old he learned that his father was going to prison. "It was terrible," he laughed. "I adored him."

His father, convicted of selling fake bonds, was sent away to prison for three years. Lear still remembers a neighbor's "words of wisdom": "Puts his hand on my shoulder and says, 'Well, you're the man of the house now, Norman.' And 'There, there, a man doesn't cry!' Nine years old, I'm hearing that! I thought, well, teaches me a lot about the foolishness of the human condition. Ultimately it taught me that there's humor everywhere, in every situation."

Lear's worldview was also shaped by trips to New York City, looking out the train window into the apartments of Harlem.

"The tenements felt like they were eight feet away. They were probably 30 feet -- they were very close. And the windows leading into the apartments were very visible, and life inside those windows. And they were largely African-American. And I used to wonder about them. Who were these families? What were they thinking? What were their problems?

"I also had something in common with them. I knew by then that as Jewish kid, there were people who hated me simply for that reason. And I understood certainly by then that black people had it worse than I had it."

A few years later, Lear would look out different windows and see African-Americans, this time high in the skies over Europe.

During World War II, Lear was a radio operator and gunner, flying more than 50 bombing missions over Germany and Italy. His escort during some of these dangerous flights: the famed all-black Tuskegee Airmen.

A few months ago, Lear met one of them, Professor Roscoe Brown, face-to-face for the first time.

"How amazing is it that the two of us flew the same mission, over Berlin, no less," Lear said.

Both men were honored at Veteran's Day ceremonies in New York City -- and honored to be with each other.

Rocca asked, "What would you see on those missions?"

"Well, we flew about 100 feet over the bombers," Brown said. "Sometimes we'd drop down right close to them, and our job was to protect them from the enemy fighters."

"I'm probably standing here with him because he was there!" said Lear.

Today Lear is still in fighting shape. Most mornings he's up early, stretching and strengthening himself for the day ahead, as he demonstrated for Rocca. "I get applause doing this," Lear laughed.

He probably deserves a standing ovation.

"I must say this does feel good," Lear said.

No, Norman Lear is not the retiring type. He's updating his hit show "One Day at a Time" for Netflix, this time with a Latino cast.

And he has no intention of pulling the plug on "Guess Who Died?"

"So, if there's a television executive who can green-light a show watching us right now, are you available for a meeting?" Rocca asked.

"Oh, yes. All he has to do is throw up a window and scream: 'There aren't enough old people on television! I'm not going to take it anymore!'"