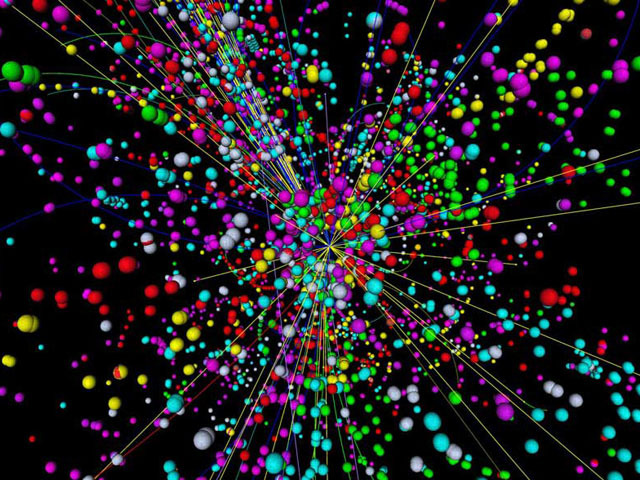 Physicists working at the Large Hadron Collider (LHC), a particle accelerator at CERN Laboratory in Switzerland, are trying to slam particles together hard enough to break them into never-before-seen pieces, which could solve some of the biggest puzzles in nature.

But UFOs -- unidentified falling objects, that is -- keep getting in their way.

The LHC is a 17-mile (27-km) circular tunnel lined with powerful magnets, which accelerate protons (particles in the nuclei of atoms) to 99.9999991 percent the speed of light. Beams of these super-brisk protons are accelerated clockwise around the ring and collide with beams traveling counter-clockwise, and, like a well-struck piñata, a dead-on hit produces a thrilling outburst of subatomic goodies. When they turn the proton beams up to full power, the physicists hope to find the Higgs boson, also known as the "God particle," which is believed to create the drag that gives everything else mass, among the collision debris. They'll also look for dark matter, the invisible substance that permeates the outskirts of galaxies.

However, since last year, something has been fluttering in the way of the proton beams and dampening the force of their blows, the physicists say. These "UFOs" aren't from outer space -- they're probably microscopic dust particles of unknown origin -- but they're still mysterious, and while they're around, the prize goodies will likely remain stashed.

UFOs are "one of the major known limitations for the performance of the Large Hadron Collider," wrote Tobias Baer, a physicist working at the LHC, and colleagues in a paper for the recent IPAC2011 conference in San Sebastián, Spain. The researchers have spent the past few months trying to characterize the UFOs, and are devising strategies to get rid of them.

More than 10,000 possible UFO events -- occasions when there were proton-beam losses thought to result from UFOs blocking the protons -- were observed between April and August, some so significant that they triggered "beam dumps," where the beam automatically shut down. Many of these events occurred in the electric arc that produces the beam of protons, the researchers wrote. Because the events became more frequent as the intensity of the proton beam increased, they "are expected to be very critical for LHC operation at higher energies."

Even more UFO events, and resulting beam dumps, happened at a point in the beam just past objects called injector kicker magnets (MKIs), suggesting that these magnets are a major source of the mystery objects. The large impact of these UFOs implied that they were being accelerated toward the proton beam by the magnets, which could only happen if the UFO particles were charged.

"Many additional studies are ongoing to gain a more profound knowledge about the behavior, impact and production mechanism of UFOs," Baer et al. wrote.