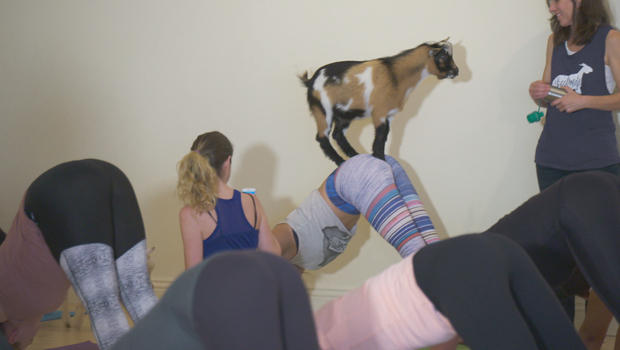 We "kid" you not -- pygmie goats are the hottest thing in yoga, as our Luke Burbank found out (This story was originally broadcast on January 28, 2018):

It's a typical Sunday at Laughing Frog Yoga Studio in Santa Monica, California, and yoga enthusiasts are lined up, mats in hand, ready to go. But this particular class can't start until two of its most adorable participants show up: Floyd and Roscoe.

"They're really funny creatures. They're affectionate, they're social, but the thing that is really neat about goats is that they seem to bring out the best in people," said Floyd and Roscoe's "mom," Michelle Tritten.

"People really have a good time with them," she said. "They say things like, 'This is the best day of my life. I can't remember the last time I smiled this big,' And so it's, like, they make people feel good.

"The goats have no boundaries, they'll do anything."

And she means anything. Yoga enthusiast Sarah Dawson was peed on. "Yes, which I believe is very lucky," she laughed. "So hopefully now I'm gonna win the lottery this week, or something good is gonna happen. My mat is a little bit wet!"

If yoga is "all about breathing," then goat yoga might be all about laughter.

Now, Goat Yoga just seems like something they would have invented in Southern California. But it actually got its start in 2016, almost a thousand miles to the north, in the central Oregon town of Albany.

"I had been at a point in my life where it was really a mess," Lainey Morse told Burbank. "I was going through a divorce, got diagnosed with a disease. And so I would come home every day and spend time with the goats. And it's impossible to be sad and depressed when you have goats around you."

Morse started offering this "goat therapy" to others, hosting "goat happy hours," where people could come and just hang out with the goats. That led to a conversation with a friend who, it just so happens, is a yoga instructor.

"The goats are all around us," Morse recalled. "And she's like, 'You should really let me have a yoga class out here.' I said, 'Okay, but the goats are going to be all over the humans. You know this, right?' And she was like, 'Cool.'"

The idea took off immediately.

"Thousands of people were lining up to do these classes," Morse said. "At the end I had, like, 2,400 people on this waitlist to do Goat Yoga."

In fact, it proved so popular that Morse eventually quit her marketing job to run Goat Yoga full time: "I have big and small, old and young. People who've never even tried yoga before come to these classes."

There's no denying that more and more people are seeing goats less and less as just livestock … and goats looking cute and making silly sounds seem to be popping up everywhere, from the Country Music Awards to YouTube, thanks in part to Leanne Lauricella. She was working as a corporate event planner when she got two baby goats on a whim.

"What surprised me about being a goat owner was how much I liked it -- working outside with goat poop and hay and straw," Lauricella said. "The more time that I spent cleaning stalls, the less that I wanted to go back to the city and go to work.

"So, I took the plunge and quit my job with zero plans, and on my first day of unemployment Instagram featured one of my photos on their homepage, and I got, like, 30,000 followers within a few hours. I took it as a sign that I was on the right track."

Today Lauricella's full time job is caring for the "Goats of Anarchy" -- her Instagram-famous herd of mostly disabled goats from her home in rural New Jersey.

"Luckily, because of social media, people are finding out, 'There's a crazy goat lady in New Jersey that will take your goat with no legs,'" Lauicella said.

Burbank asked, "Are you okay with us putting that message out on CBS? That there's a crazy goat lady in New Jersey that will take your special needs goat?"

And if there's an especially legendary goat … sort of the Kim Kardashian of ruminants … it would have to be Polly, a blind goat that (according to Lauricella) suffered from anxiety attacks unless it was wearing a duck costume.

And yes, Polly's story is now the subject of a kid's book, "Polly and Her Duck Costume" (Walter Foster Jr. Books).

And it took her a while, but even Lauricella has embraced Goat Yoga at her farm … at least, her version of it. "We use full-size goats; we don't use baby goats," she said. "So, this is yoga at your own risk."

A risk Burbank was willing to take, in the barn that started it all back in Albany, Oregon.

It was fun … and actually a little harder than it looks, what with all the adorable distractions. After a "petting break," he got back to the session, before wrapping things up in the customary Goat Yoga fashion, with a chant, of baaaah-maste.