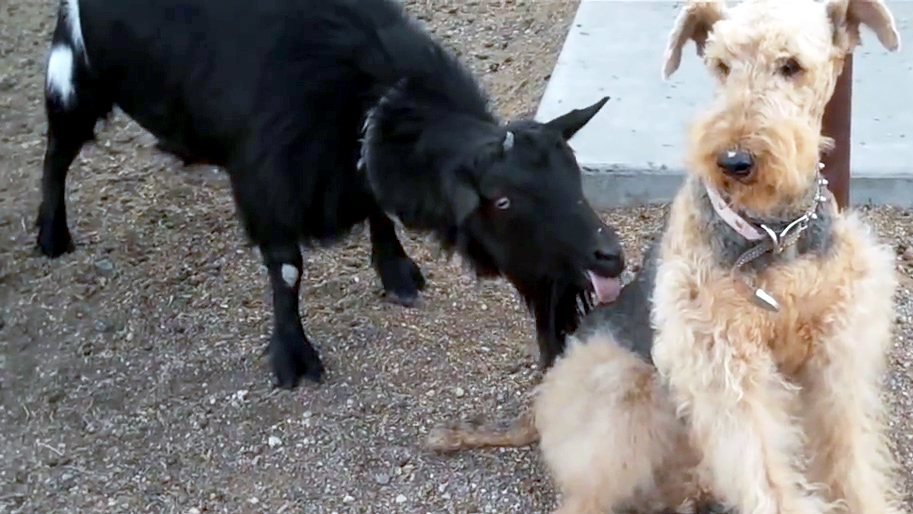 This week's most popular viral videos include a goat licking a dog, kids playing Led Zeppelin, shredding gnar while playing guitar, thundersnow songified, a robot guy eating a sandwich and a baby laughing like a troll.

First up, nevadamountains shared this video of a goat licking a dog. The sounds the goat makes and the reaction, or lack thereof, from the dog are uproarious.

Louisville Leopard Percussionists prove that the music of Led Zeppelin is ageless. In this impressive video, the kids, who range between 7 and 12 years old, perform percussion-based renditions of "Kashmir," "The Ocean" and "Immigrant Song."

Canada native Chris Hau decided to take some GoPro cameras and try to shred on his guitar while shredding some wakes. He pulls it off quite well.

The world got a good laugh when famed weatherman Jim Cantore couldn't contain his excitement after experiencing six instances of rare thundersnow. Cantore's boisterous reaction went viral so fast that it was destined to be songified by the schmoyoho crew into this musical masterpiece.

Maddchadd is really good at doing the robot -- almost too good. In this video, he demonstrates what it looks like when a robot tries to eat a sandwich, or "nom noms" as he calls it.

And, this baby's laugh is both contagious and slightly disturbing. Mooonez, the poster of the video, compares the baby to a troll. Others have compared him to everything from a supervillain, to a drunk guy, to the spirit of Danny DeVito.