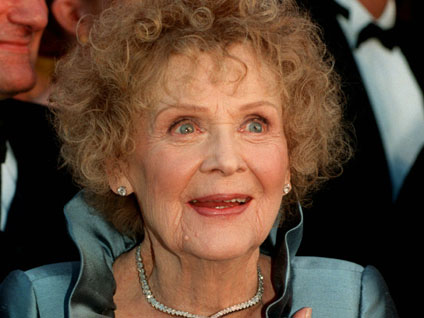 Gloria Stuart, the 1930s Hollywood beauty who gave up acting for 30 years and later became the oldest Academy Award acting nominee as the spunky survivor in "Titanic," has died. She was 100.

Stuart died of respiratory failure Sunday night at her Los Angeles home, her daughter, Sylvia Thompson, said Monday. The actress had been diagnosed with lung cancer five years ago and had beaten breast cancer about 20 years ago, Thompson said.

"She did not believe in illness. She paid no attention to it, and it served her well," Thompson said. "She had a great life. I'm not sad. I'm happy for her."

In her youth, Stuart was a blond beauty who starred in B pictures as well as some higher-profile ones such as "The Invisible Man," Busby Berkeley's "Gold Diggers of 1935" and two Shirley Temple movies, "Poor Little Rich Girl" and "Rebecca of Sunnybrook Farm." But by the mid-1940s she had retired.

She resumed acting in the 1970s, doing occasional television and film work, including Peter O'Toole's 1982 comedy "My Favorite Year." But Stuart's later career would have remained largely a footnote if James Cameron had not chosen her for his 1997 epic about the doomed luxury liner that struck an iceberg and sank on its maiden voyage in 1912.

Stuart narrates the film as the elder Rose Calvert, the 101-year-old survivor who joins treasure hunters searching the Titanic's wreckage for a legendary diamond necklace. Toward the film's end, she reveals the necklace she has secretly possessed since the ship sank, and drops it into the ocean.

In her 1999 autobiography written with daughter Sylvia Thompson, "Gloria Stuart: I Just Kept Hoping," Stuart said that after reading the script, "I knew the role I had wanted and waited for all these many years had arrived! I could taste the role of Old Rose!"

The 1997 "Titanic" became the biggest modern blockbuster up to that point. Both Winslet and Stuart earned Oscar nominations, Winslet as best actress and Stuart as supporting actress.

At 87, Stuart's nomination made her the oldest actress ever nominated for an Academy Award. It was also the first time in Oscar history that two performers were nominated for playing the same character in the same film

"I am so saddened to hear of the loss of this remarkable woman," Winslet said. "I feel blessed to have met her, known her and to have acted alongside her. Anyone who spent time in her presence will know what an extraordinary shining light she truly was. She will be deeply missed."

Cameron wanted an actress who was "still viable, not alcoholic, rheumatic or falling down," Stuart once said. Then in her mid-80s, Stuart endured hours in the makeup chair so she could look 15 years older, and she traveled to the Atlantic location, where the wreck of the real Titanic was photographed.

"Titanic" took in $1.8 billion worldwide to become the biggest modern blockbuster, a position it held until Cameron's "Avatar" came along last year and passed it on the box-office chart.

"Anchors aweigh!" Stuart said when nominations were announced in February 1998.

The film's release was preceded by delays and speculation that it could turn into a colossal flop. Of the film's doubters, Stuart said: "They were dissing it all around. That happens in Hollywood."

Stuart was thought by many to be the sentimental favorite for the supporting-actress prize, but the award went to Kim Basinger for "L.A. Confidential."

The actress celebrated her 100th birthday in July, in a party attended by friends, family, "Titanic" director James Cameron and co-stars Frances Fisher, Shirley MacLaine and Tom Arnold. Shortly after, she was honored with a tribute at the Academy of Motion Picture Arts and Sciences.

"She talked with a thousand or so people as if they were in her living room," Stuart's daughter said. "She was just the ultimate hostess."

The best known of her early film work came in two of the celebrated series of horror films by director James Whale.

In 1932's "The Old Dark House," Stuart plays one of the travelers who take refuge in a spooky home peopled with strange characters, one played by Boris Karloff, fresh off his star-making turn in Whale's "Frankenstein."

In 1933's "The Invisible Man," Stuart is the love interest for the scientist (Claude Rains) who makes himself invisible.

Among her other films were the Eddie Cantor comedy "Roman Scandals," John Ford's "The Prisoner of Shark Island" and a string of dramas. She said she quit the business because she was tired of playing "girl detective, girl reporter and Shirley Temple's friend."

A founding member of the Screen Actors Guild, Stuart said in an interview with The Associated Press last summer that she realized she would not achieve the level of success of Hollywood's top stars.

"I didn't get to be Greta Garbo," Stuart said. "Terrible. A terrible blow. It took me a long time to get over that. But I'm over that."

Still, Stuart brought spirit and intelligence to many routine plots.

"The Girl on the Front Page" is typical of such films. Made in 1936, it tells the story of a socialite who inherits a newspaper when her father dies suddenly. Stuart's character decides to learn the business by working anonymously as a reporter, and after some sparring with the tough editor, she winds up helping him solve a murder-blackmail plot.

In her later years, she took an occasional role in television, but before doing "Titanic," she had not worked in several years. She also became an acclaimed painter, holding exhibitions of her work, and took up fine book printing, for which she did her own artwork.

Stuart was born in 1910 in Santa Monica, Calif., and began acting while in college. She soon signed with Universal Studios, which was responsible for "The Old Dark House" and many other horror classics of the 1930s.

Stuart is survived by a daughter, Sylvia Vaughn Thompson, four grandchildren and 12 great-grandchildren.