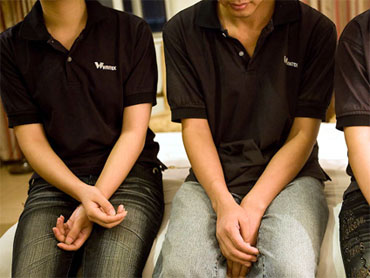 (Sharron Lovell/GlobalPost)
Editor's note: Silicon Sweatshops is a five-part GlobalPost investigation of the supply chains that produce many of the world's most popular technology products, from Apple iPhones, to Nokia cell phones, Dell keyboards and more. The series examines the scope of the problem, including its effects on workers from the Philippines, Taiwan and China. It also looks at a novel factory program that may be a blueprint for solving this perennial industry problem. Following is the first article in the series.

TAIPEI, Taiwan - Hourly wages below a dollar. Firings with no notice. Indifferent bosses. Labor brokers that leech away months of a worker's hard-earned wages. A corporate shell game that leaves no one responsible.

Such conditions are widespread at the contract factories cranking out some of the most popular gadgets on the holiday season's gift lists, according to labor rights activists and workers interviewed by GlobalPost.

Whether it's your cherished iPhone, Nokia cell phone or Dell keyboard, it was likely made and assembled in Asia by workers who have few rights, and often toil under sweatshop-like conditions, activists say.

By the time a gadget reaches Apple's flagship store on Fifth Avenue in New York City or any other U.S. retailer, it may have passed through the hands of a heavily indebted Filipina migrant worker on the graveyard shift in Taiwan, a Taiwanese "quality control" worker who'll soon be fired without warning, and a young Chinese worker clocking 80-hour weeks on a final assembly line, at less than a dollar an hour.

Recent years have seen a drumbeat of reports on such abuses. In 2006, in an audit following a British media report, Apple found that workers in a factory assembling iPods in China were working excessive overtime hours.

Earlier this year, the Pittsburgh-based National Labor Committee, a nonprofit human rights group, alleged that workers at a supplier to Microsoft, Dell and other brands in Dongguan, China, were clocking mandatory 81-hour weeks, on average. (Dell said in an email that a "corrective action plan" has since been developed after a joint audit of the firm with other customers. A Microsoft spokesperson said it was investigating the supplier firm and would make any "necessary improvements.")

Embarrassed companies have vowed to do better. They've drafted "codes of conduct" for their Asian suppliers, and promised more factory audits to catch abuses.

But here's the problem, say activists: While such codes may be great public relations, they're not working to fix the problem. Worse, the codes permit the big brands to pat themselves on the back, even as workers continue to be exploited in the shadowy world of Asian electronics supply chains.

"These codes of conduct and audits are new tools that every brand will have, and they feel so proud of themselves," said Jenny Chan, a labor rights activist formerly with Hong Kong labor rights group Students and Scholars Against Corporate Misbehavior (SACOM). "But the codes have limits. To see fundamental change, you have to get labor groups involved and gain the trust of workers. Otherwise it's just a cat-and-mouse game between auditors and suppliers."

The problem is compounded by a lack of transparency. Asian electronics supply chains are notoriously murky. Contractors shift orders across borders and between factories and subcontractors, and many major brands treat their supplier list as top-secret information.

That makes it difficult to pin down who's making what for whom and, therefore, difficult to fix blame when allegations of abuse come to light. When a factory catches flak from labor rights groups and negative media coverage, the big customers often cut orders or sever business ties - a surgical strategy that activists say fails to address underlying, systemic problems in the industry.

Even by the industry's own assessment, its codes are routinely ignored.

In its latest annual report, the Electronic Industry Citizenship Coalition (EICC) published results of joint audits in 2007 and 2008. (EEIC members employ some 3.4 million workers. Members include Apple, Dell and Hewlett-Packard.) It found rampant violations of its code of conduct on working hours and wages and benefits.

Or take Apple's own findings. In its latest "supplier responsibility" update, published in February 2009, Apple found that nearly 60 percent of audited suppliers violated its code of conduct guidelines on work hours and days off.

Other common violations included under-paying for overtime and deducting salary as punishment. And Apple found a few factories that falsified records, employed under-aged laborers and hired workers who had paid recruitment fees exceeding the legal limit.

All of that raises a question: Why aren't the big brands being tougher in enforcing their codes?

Apple insists it is doing a lot. "Our audits are done across all our suppliers," said Apple spokesperson Jill Tan, in a phone interview. "It's a pretty rigorous process, and we take corrective actions as and when required. We audit aggressively, and post all results on our website."

The company's code is a "dynamic document which we continually update," Tan said, and audits are done both by Apple itself, and third-party experts.

Asked how Apple responds to those who say it's hiding behind codes that are ineffective in securing workers' basic rights, Tan said, "It's not just a matter of posturing, we look into this very meticulously. To me, we're pretty open. We don't see how we can provide more information beyond what's already available."

(Apple declined GlobalPost's request to go beyond the public relations department and interview Bob Bainbridge, the firm's director of social responsibility for suppliers.)

Dell also rejected the idea that industry codes aren't effective. "We take exception to that," said spokesman David Frink. "Given the size and breadth of the global supply chain, full implementation of these important standards is a long-term effort to which Dell is fully committed," the firm said in a later email.

In May, GlobalPost covered reports of labor abuses at just one Taiwan electronics firm believed to supply Apple, Nokia and Motorola at its factories in Taiwan and China. Since then, we've interviewed 12 current and former workers at this same company. We heard the following new allegations:

* For Taiwanese workers, routine violations of Apple and industry codes of conduct on work hours, days off, overtime, worker complaint mechanisms and the right to organize;
* For Chinese workers, violations of a major electronic industry group's code of conduct on all of the above, and allegations of under-aged labor;
* For Filipina migrant workers, "placement fees" far in excess of Taiwan regulations, with fees and deductions amounting to nearly a full year's salary - a "core" violation of Apple's code.

These allegations, which are documented throughout this series, are by no means limited to this one supplier. Taiwan's labor broker system applies to many Southeast Asians who come to work on the island. And labor rights groups have done numerous studies of the scope of the problem (see links below).

But the news is not all bleak.

In our reporting, we heard sincere commitments to deal with these issues by frustrated executives who struggle with these complex economic realities. We also learned of a groundbreaking project to improve conditions at a Taiwan supplier for HP that appeared to have excellent results. Though limited in scope, the project offers some degree of hope that the big electronics brands can do more to fix the problem.