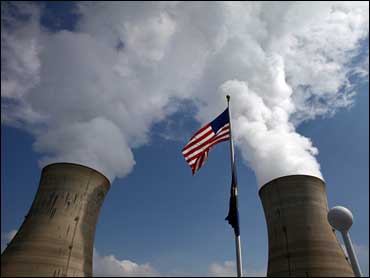 The nation's worst nuclear power plant accident was unfolding on Pennsylvania's Three Mile Island when an industry economist took the rostrum at a nearby business luncheon.

It did not go well.

Those in the standing-room-only crowd listened to economist Doug Biden's thoughts about cheap, reliable nuclear power, but Biden could not calm their nerves or answer their pointed questions: Should they join the tens of thousands of people fleeing south-central Pennsylvania? Should they let their children drink local milk?

Three decades later, fears of an atomic catastrophe have been largely supplanted by fears about global warming, easing nuclear energy into the same sentence as wind and solar power. Dogged by price spikes and an environmental assault on carbon dioxide emissions, fossil fuels are the new clean-energy pariah.

"There's a lot of support for nuclear now, and most of that support is borne out of a concern for the desire to have emissions-free energy sources," said Biden, who still advocates for power companies as the president of Electric Power Generation Association in Pennsylvania.

Policymakers in numerous states are warming to nuclear power, even in states where the facilities are banned. Nuclear reactors generate one-fifth of the nation's power. Some see nuclear as a stable, homegrown energy source in light of last year's oil price spikes. Others see it as a way to meet carbon-reduction goals.

Public interest is emerging, too: A Gallup Poll released in recent days shows 59 percent favor the use of nuclear power, the highest percentage since Gallup first asked the question in 1994.

If the U.S. nuclear industry is hitting a new high point, Saturday marks the anniversary of its low point. Thirty years ago, the partial meltdown of Three Mile Island's Unit 2 put the perils and shortcomings of nuclear power under the world's microscope.

No one was seriously injured in the accident, in which a small amount of radiation was released into the air above the Susquehanna River island 12 miles south of Harrisburg. Studies of area residents have not conclusively linked higher rates of cancer to radiation exposure.

Since then, the U.S. Nuclear Regulatory Commission has not granted one license for a nuclear power plant. The industry says it has made major safety advances, but huge obstacles remain.

It takes years to license and build a reactor. Construction costs billions of dollars. The nation has no long-term storage site for the 2,000 tons of radioactive waste being produced annually by the 104 reactors operating in 31 states.

While some environmental groups grudgingly accept nuclear power as part of the energy landscape, others continue to oppose it. Counting waste costs and government subsidies makes nuclear no more effective than a combination of efficiency measures, desert solar stations, wind power and geothermal energy, they say.

Last month, President Barack Obama called for a cap on greenhouse gas emissions that would almost certainly raise the cost to operate coal- and gas-fired plants. It was another arrow in the quiver of nuclear power advocates who argue that there is no other reliable source of power that is free of greenhouse gas emissions, such as carbon dioxide.

In the last two years, 26 applications for new reactors have been submitted to the Nuclear Regulatory Commission, which expects to issue licenses around 2011. No applications were filed in the 28 years following the Three Mile Island accident.

In red states and blue states, public officials are paving the way for new reactors to call their states home. Even lawmakers in fossil fuel-rich Oklahoma, are advancing a bill that would effectively lift a moratorium on nuclear power.

"It makes sense to at least have other options out there," Oklahoma House Speaker Chris Benge said.

Republican Charlie Crist of Florida and Democrats Ed Rendell of Pennsylvania and Martin O'Malley of Maryland, governors who get high marks from environmental groups, all support proposals for new reactors in their states.

"By no means is (nuclear power) the sole answer to our energy problems, but I think it actually has a definitive place in the whole array of things we need to do to reach our goals of producing enough to meet demand," Rendell said.

In the past year, the Florida Public Service Commission has approved four new reactors, including two at a proposed Progress Energy Inc. plant along central Florida's Gulf Coast.

Down the Susquehanna River from Rendell's office in the Pennsylvania Capitol, the destroyed Three Mile Island Unit 2 remains sealed.

Its core was shipped away years ago and what is left inside the containment building remains highly radioactive.

Next to it is Three Mile Island's Unit 1, now owned by Exelon Corp. and still churning out electricity. Three Mile Island would even make a fine place to build another reactor - were it not for the memory of the 1979 accident, perhaps.

"I think politically that would be difficult," Biden said.