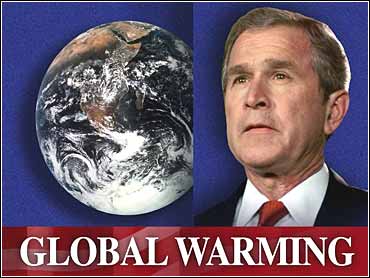 Around the globe, reactions were mixed to President Bush's anti-pollution proposal that was unveiled Thursday.

Japan, host to the talks that yielded the world's first global warming agreement, on Friday praised Mr. Bush's proposal but said it hopes the U.S. will eventually return to the Kyoto protocol.

Germany criticized Washington's anti-pollution proposal, saying it was unlikely to help lower emissions of greenhouse gases. The European Union said the plan was "no alternative" to the Kyoto agreement.

But Kawaguchi, who was Japan's environment minister until early this month, said Tokyo will continue lobbying Washington to accept the Kyoto protocol.

German Environment Minister Juergen Trittin said the plan presented Thursday by the Bush administration was "disappointing" because it was only voluntary.

"We must not slam the door for a return of the United States under the Kyoto protocol's regime," he said. "We must not let the country with the biggest emissions of greenhouse gases worldwide escape responsibility for protecting the global climate."

In Brussels, European Union Environment Commissioner Margot Wallstroem said "the plan is no alternative to the Kyoto protocol to which the EU remains fully committed."

"The protocol is the only effective international framework for combating global warming and we urge the United States to return to the Kyoto process," she said.

Australian Prime Minister John Howard called Mr. Bush's proposal "a very positive thing." But he remains firmly against ratifying the Kyoto accord unless the United States also adopts it.

Click here for a closer look at the Bush presidency.

The president said that if the U.S. succeeds in cutting greenhouse gas by 18 percent, it would be the equivalent of taking 70 million cars off the road.

But environmental groups were skeptical, particularly because Mr. Bush's proposals rely on voluntary efforts. They said his proposal to cut the greenhouse gas "intensity" by 18 percent over 10 years would actually mean thamore greenhouses gases will be emitted then than now.

"The administration may be able to fool the American people that they're doing something, but they can't fool the atmosphere," said Dan Becker, a spokesman for the Sierra Club.

The Environmental Defense Fund also dismissed the 18 percent goal, saying it guaranteed greenhouse gas emissions would grow as long as the economy did.

"Most of the leaders said, 'It sounds thoughtful, sounds good. We'll listen to the president and let you know,'" Fleischer said.

Mr. Bush seeks to draw more businesses into a registry of companies that report their greenhouse gas output to the government. They then could trade newly created credits with each other, much as they can under Clean Air Act provisions aimed at curbing acid rain.

Currently, just 222 companies, mostly electric utilities, register and report. The Bush administration does not have a firm goal for how many businesses it seeks to attract to the program.

One incentive to join would be a guarantee that businesses could use the credits in any future system.

Mr. Bush says that maintaining and improving about 80 other programs can also help slow greenhouse gas emissions. Through tax incentives, he would urge farmers to plant carbon dioxide-absorbing trees, consumers to buy hybrid and fuel-cell cars and solar water heaters and industry to capture methane, a potent greenhouse gas, from landfills.

He also would use tax breaks to encourage wind and "biomass" energy generation, in which burning grass, trees and waste produces electricity.

The president's proposed budget allocates $4.5 billion for global climate change-related activities, a figure the administration said would be a $700 million increase.

Mr. Bush would direct his Cabinet secretaries to lean on those they deal with to make "real commitments" to cut greenhouse gases.

In a separate effort, Mr. Bush also seeks an "unprecedented" reduction in power plant emissions of sulfur dioxide, nitrogen oxide and mercury, which the administration called the worst air pollutants.

This would be a "cap-and-trade" program in which the government would set mandatory ceilings on total industry output, and let companies earn and trade credits.